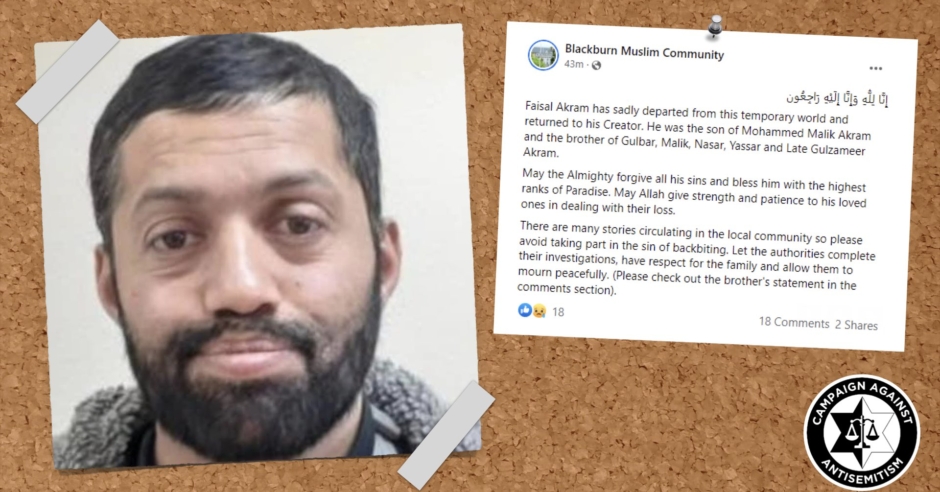 Following the confirmation that the dead British man who attacked Congregation Beth Israel in Texas was 44-year-old Malik Faisal Akram, the “Blackburn Muslim Community” Facebook page has reportedly prayed for “the Almighty” to “bless him with the highest ranks of Paradise” in a now-deleted post.

Mr Akram entered the synagogue during Sabbath services, making threats against the congregation and holding them hostage, demanding the release of Aafia Siddiqui, who is currently serving an 86-year prison sentence in Texas.

Following a standoff, the authorities raided the synagogue, killing Mr Akram and freeing the hostages.

A statement purportedly from Mr Akram’s brother published by the same Facebook page claimed that Mr Akram had in fact released all of the hostages before the authorities conducted their raid and killed him. The statement added: “We would also like to add that any attack on any human being be it a Jew, Christian or Muslim etc is wrong and should always be condemned. It is absolutely inexcusable for a Muslim to attack a Jew or for any Jew to attack a Muslim, Christian, Hindu vice versa etc.”

Dr Siddiqui is convicted of two counts of attempted murder, armed assault, using and carrying a firearm, and three counts of assault on US officers and employees. Upon her conviction, raising her middle finger in court she shouted: “This is a verdict coming from Israel, not America. That’s where the anger belongs.” Dr Siddiqui had refused to work with a legal team provided to her by the Pakistani embassy on account of them being Jewish, and she had also demanded that jurors be subject to some sort of genetic testing to assess whether they were Jewish.

In a letter to former US President Obama, Dr Siddiqui wrote: “Study the history of the Jews. They have always back-stabbed everyone who has taken pity on them and made the ‘fatal’ error of giving them shelter…and it is this cruel, ungrateful back-stabbing of the Jews that has caused them to be mercilessly expelled from wherever they gain strength. This why ‘holocausts’ keep happening to them repeatedly! If they would only learn to be grateful and change their behaviour!”

Campaign Against Antisemitism is investigating who operates the “Blackburn Muslim Community” Facebook page and alerting the authorities.

A spokesperson for Campaign Against Antisemitism said: “We join Jewish communities around the world in relief that Malik Faisal Akram’s attack on Congregation Beth Israel in Texas ended without physical injury to worshippers at the synagogue, and in giving thanks to the courageous law enforcement officers who secured their safety.”

“That the perpetrator came from the United Kingdom raises very serious questions for British authorities, including whether Mr Akram was encouraged or supported by local elements who may pose a continuing threat to the Jewish community or the wider public. That a ‘Blackburn Muslim Community’ Facebook page purporting to represent the local Muslim community published a now-deleted post calling for ‘the Almighty’ to ‘bless him with the highest ranks of Paradise’ demands an urgent investigation. We are looking into who operates the page and alerting local law enforcement.”

Coffin draped in Nazi flag while mourners give Nazi salutes at funeral in R...
Scroll to top