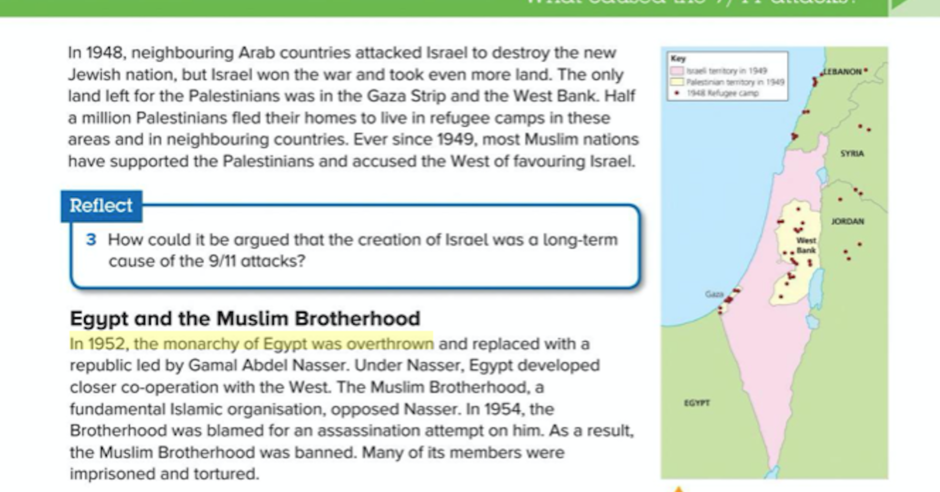 A school textbook has been removed from sale after research revealed that it included the question: “How could it be argued that the creation of Israel was a long-term cause of the 9/11 attacks?” It is understood that this is the only time Israel is mentioned in the entire book.

The problematic question alludes to a popular nonsense antisemitic conspiracy theory that Israel or its intelligence services were somehow connected to or to blame for the 9/11 Islamist terrorist attacks.

The researcher David Collier brought the offending material to light, and the Hodder Education Group said on Thursday that it was removing the textbook from sale and would publish a revised issue.

In a statement, the publisher said: “We appreciate the phrasing of the question is not as precise as it might have been and we are very sorry for any offence this has caused.”

However, the fact that an antisemitic conspiracy theory could make its way into a textbook for children by a reputable publisher illustrates just how commonplace such anti-Jewish beliefs have become. Campaign Against Antisemitism calls for answers as to how the offending question was included in the book and what measures or training the publisher is taking to prevent the problem recurring in future.

The revelation comes as the Government pledged to act against textbooks in the Middle East funded by taxpayer money that encourage children to commit violent acts against Jews, using the language of genocidal antisemitic terrorist organisations, and which are reportedly taught in classrooms by teachers who describe Jews as “pigs and apes” and call for them to be murdered, and praise Hitler.