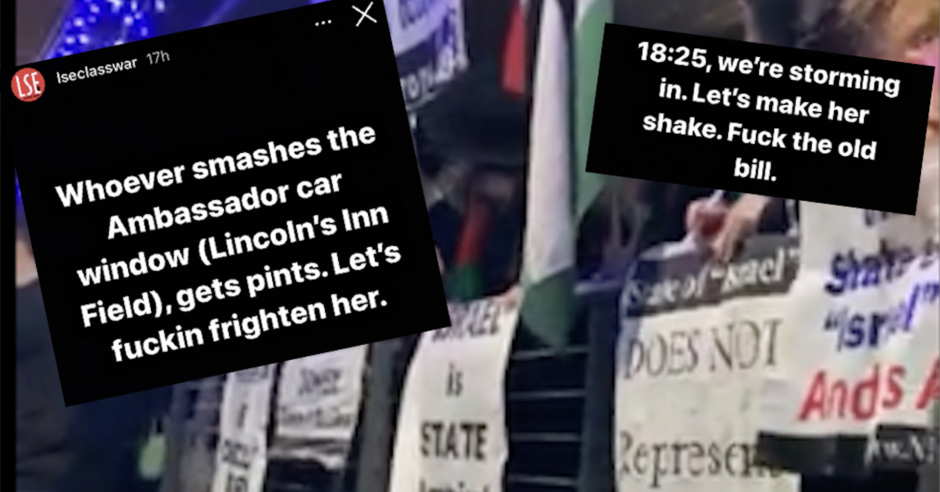 Campaign Against Antisemitism is calling for arrests over scenes last night at the London School of Economics (LSE).

A mob of students was filmed shouting an antisemitic chant in a protest against a talk by the Israeli ambassador at their university, before trying to intimidate her as she left campus.

A rally of some 500 students were caught on film chanting “from the river to the sea, Palestine will be free”, a refrain that only makes sense as a call for the destruction of the world’s only Jewish state – and its replacement with a State of Palestine – and is thus an attempt to deny Jews, uniquely, the right to self-determination, which is a breach of the International Definition of Antisemitism. The LSE has adopted the International Definition of Antisemitism.

In deeply disturbing online posts, an Instagram account titled “@lseclasswar”, which is believed to be associated with the protesters, posted calls for violence, writing: “Whoever smashes the Ambassador [sic] car window (Lincoln’s Inn Field), gets pints. Let’s f***in frighten her.” They also posted: “18:25, we’re storming in. let’s make her shake. F*** the old bill.”

It is a criminal offence to incite violence or to aid, abet, counsel or procure the commission of criminal damage.

The mob was prevented from reaching the ambassador by police officers, however her security team had to move quickly to keep her safe. Jewish students left safely from the main entrance under the protection of CST.

A spokesperson for Campaign Against Antisemitism said: “These were extremely disturbing scenes which reflect the tenor that discourse has descended to at LSE. Those responsible for the criminality that we witnessed must be arrested. If they are students, LSE must bring disciplinary action against them in accordance with the International Definition of Antisemitism, which it has adopted. LSE already has a poor reputation when it comes to protecting Jewish students, so when a mob shouts antisemitic chants and online there are calls for violence, it has a duty to act and cooperate with the police.”

Third man arrested over antisemitic chanting by West Ham fans on flight to ...
Scroll to top