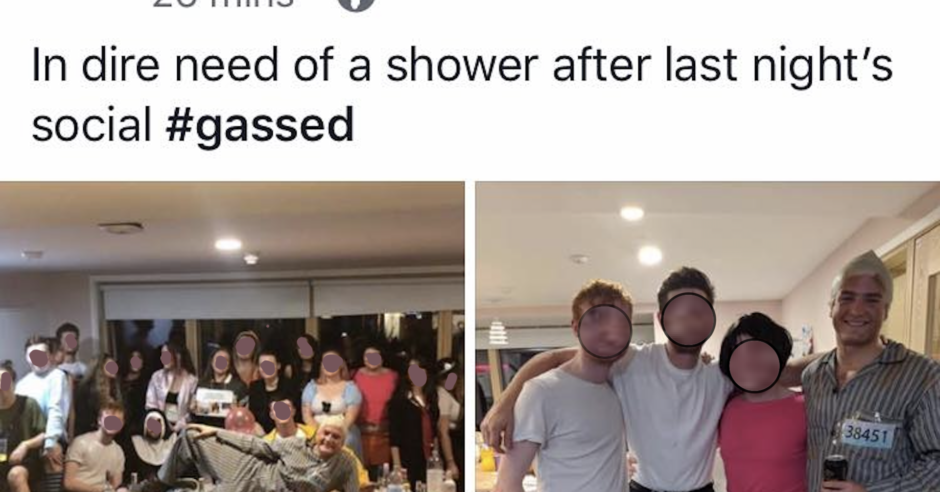 After Campaign Against Antisemitism publicised how one of the candidates to become Edge Hill University’s Students’ Union president had recently dressed up as a Holocaust victim for a “Movie and TV Show” themed night out, more evidence has come to light of his mockery of the Holocaust.

Sam Farrell was seen in images posted on social media apparently dressed in striped pyjamas with a number appended, and wearing a cap, reminiscent of an inmate at Nazi concentration camps, with captions accompanying the images referring to “needing a shower” and “feeling gassed”. Now yet another social media post has emerged in which he jokes about the billing for a club night saying: “pretty sure the Holocaust had better headliners”.

Mr Farrell went on to win the election last week and will be the Students’ Union’s next president and the face of Edge Hill’s student body.

The student who originally spotted the photographs and contacted Campaign Against Antisemitism complained to the university at the time and Mr Farrell was advised to remove the images from social media, but apparently no further action was taken by the university and he was permitted to continue to stand in the election by the Students’ Union.

She said: “I feel this is very insensitive, inappropriate and not someone who I want to represent my university if he feels it is appropriate to mock such a devastating event like the Holocaust.”

In a lengthy statement, Mr Farrell said (extracted): “Despite what my past posts may suggest, I do understand the severity of making light of events from history, especially when that history plays a fundamental role in reminding us of the needless persecution of others. I only hope I can convey how genuine I am when I say that I now realise how naïve and ignorant my past behaviour was. It was wrong, it will not happen again, and it should not have happened in the first place. I will not attempt to justify the behaviour by saying it occurred before I was nominated for SU President, but instead want to learn from past mistakes.”

The Students’ Union also explained that “As a Students’ Union, we take matters of this nature extremely seriously and when the individual’s actions were first brought to our attention in November 2019 we formally took disciplinary action to deal with his inappropriate behaviour. The student fully cooperated and apologised…and reiterated that it was not his intention to cause offence. He fully understood the severity of these accusations and was also given an appropriate disciplinary sanction following a thorough investigation. Since then, the student has tried to make amends and has engaged in lots of proactive initiatives to support his fellow students.

“Edge Hill Students’ Union made the decision that he should be able to run for any student officer position after carefully examining their Election Bye-Laws, which state that complaints can only be made against a candidate’s behaviour during the time that they are a candidate in the election. Taking these factors into account and adhering to the National Union of Students official guidance, the student was allowed to continue to stand in the 2020 Students’ Union Elections.”

Binyomin Gilbert, Programme Manager at Campaign Against Antisemitism, said: “Sam Farrell clearly didn’t expect any repercussions from his grotesque attempt at humour, and sadly Edge Hill University has proved him right. The university’s failure to discipline him when the incident occurred means that now, as he becomes the face of its student body, Edge Hill has become synonymous with mockery of the Holocaust. The university’s inaction is unacceptable, and we shall be writing to the administration and the Students’ Union demanding his expulsion and to the Charity Commission calling for them to investigate the institutional failure to address this matter appropriately.”

Teenager urinates on front doorstep of Jewish home while his friends look on... Scroll to top