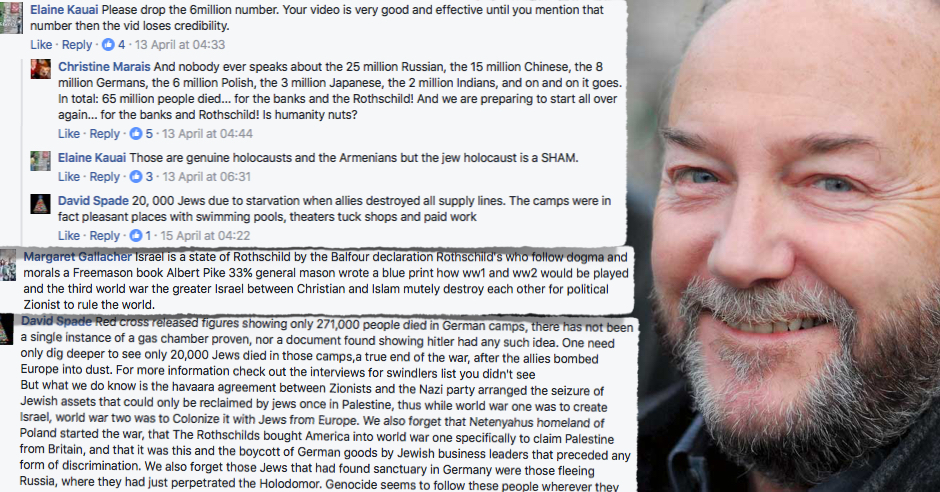 Antisemitic comments have been posted by George Galloway’s supporters on his official Facebook page. Galloway, the controversial former Member of Parliament for the Labour and Respect Parties, is an independent candidiate in the by-election in Manchester Gorton that was scheduled for 4th May and is now being held as part of the General Election on 8th June following the death of Sir Gerald Kaufman MP.

The disgraceful Holocaust denial and revisionist comments should have been immediately removed by whoever is administering or moderating the page, or by Galloway himself, but instead they have been left for all to see.

In response to a video by Galloway on “What right did Britain have to grant you somebody else’s country”, which falsely claims that the Palestinians have been made to pay for the Holocaust, and that Muslim countries historically did not discriminate against Jews, Facebook user “David Spade” wrote that: “Red cross released figures showing only 271,000 people died in German camps, there has not been a single instance of a gas chamber proven, nor a document found showing hitler had any such idea. One need only dig deeper to see only 20,000 Jews died in those camps,a true end of the war, after the allies bombed Europe into dust. For more information check out the interviews for swindlers list you didn’t see”.

In one exchange, Facebook user “Elaine Kauai” wrote: “Please drop the 6 million number. Your video is very good and effective until you mention that number then the vid loses credibility.” She added that “the jew holocaust is a SHAM.” Spade responded: “20,000 Jews due to starvation when allies destroyed all supply lines. The camps were in fact pleasant places with swimming pools, theaters tuck shops and paid work”.

This is further evidence of the growing problem of online antisemitism. Just last week, we exposed antisemitic comments posted on Labour affiliated Facebook pages following the decision not to expel Ken Livingstone from Labour. In February, Campaign Against Antisemitism made a submission to the House of Commons Home Affairs Committee’s “Policing for the future: changing demands and new challenges” inquiry. We set out in detail the challenge presented by online antisemitism and proposed a robust plan for dealing with it.

If you would like to join our Political and Government Investigations Unit, our Online Monitoring Unit, or one of our other teams, please volunteer.

Graffiti near Brighton declares: “Put Jews in ovens”, “Auschwitz was a...