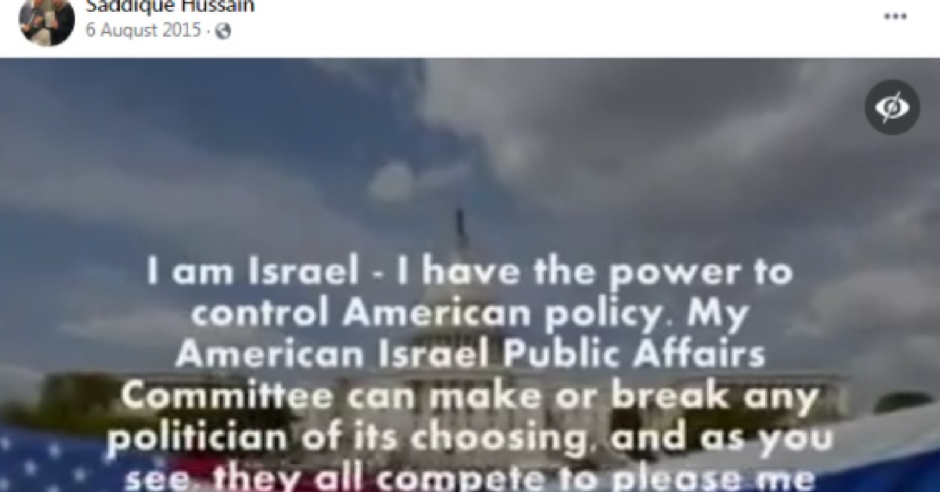 The manager of a mosque has prompted outrage after reportedly comparing Israel to the Nazis and praising the Taliban.

Saddique Hussain, the general manager of Birmingham’s Central Jamia Mosque Ghamkol Sharif mosque, reportedly shared a clip of Taliban fighters showing off assault rifles whilst reciting quotes from the Quran and wrote: “How beautiful and civilised and no ‘I’. May Allah SWT guide us on to His beautiful religion.”

It was said that Mr Hussain also shared a post which said that Israeli soldiers kill Palestinian children “for fun”. He allegedly shared a video clip from the news outlet TruNews, which has been described as a “far-right conspiracy theory and fake news website”, and according to the ADL has “increasingly featured antisemitic and anti-Zionist content, and also has a long record of disseminating radical Islamophobic and anti-LGBTQ messages”. The clip in question was from Rick Wiles, a pastor who has previously labelled Jews as “deceivers” who “plot” and “lie”, in which Mr Wiles compared Israel to the Nazis.

According to the International Definition of Antisemitism, “Drawing comparisons of contemporary Israeli policy to that of the Nazis” is an example of antisemitism.

Mr Hussain allegedly shared another clip which stated that “Zionist lobbying” could have a Sky News video that reported on Israeli military actions removed if they wanted, while another shared video reportedly contained text that said: “I am Israel – I have the power to control American policy. My American Israel Public Affairs committee can make or break any politician of its choosing.”

According to the Definition, “Making mendacious, dehumanising, demonising, or stereotypical allegations about Jews as such or the power of Jews as collective — such as, especially but not exclusively, the myth about a world Jewish conspiracy or of Jews controlling the media, economy, government or other societal institutions” is an example of antisemitism.

The group Muslims Against Antisemitism denounced Mr Hussain’s posts, stating: “Promoting views and associations between ‘media control’ and depicting ‘Zionists’ as having ‘control’ shows the conspiratorial mindset of the person in question. Focussing on Israel and blaming Israel for actions that it is not even associated with, shows the frothing and foaming nature of the antipathy that some hold.”

After a police warning, Mr Hussain claimed that he “does not and never has supported the Taliban”.

A spokesperson for Campaign Against Antisemitism said: “These posts clearly contravene the International Definition of Antisemitism and are integral to the broader Islamist ideology that has fuelled antisemitism on the streets of Britain in recent months. For such material to be promoted by anyone in a position of responsibility is deeply concerning, especially when they have already come under investigation over extremist views quite recently. These revelations should cause the Charity Commission serious concern and urgent action must be taken.”

Campaign Against Antisemitism’s Antisemitism Barometer 2020 showed that over eight in ten British Jews consider the threat from Islamists to be very serious.