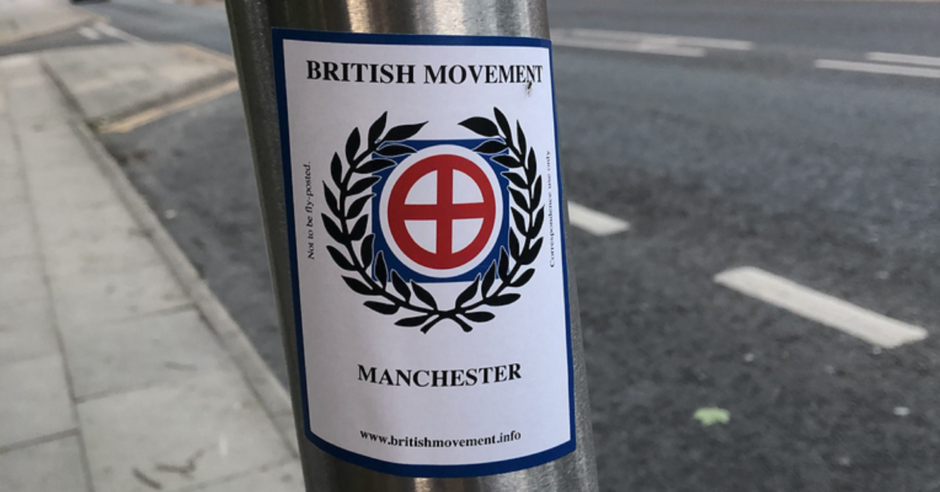 A sticker belonging to the neo-Nazi group, British National Socialist Movement, was found on a lamppost near Manchester’s Charedi Jewish community.

Discovered on 31st May, the sticker was affixed to street furniture on Great Cheetham Street West and bore the symbol of the racist organisation with the words “British Movement Manchester,” along with the group’s website.

Founded during the 1960s and having supposedly dissolved in the early 1980s, the movement exhibited antisemitism and advocated for violence towards ethnic minorities.

The group now appears, however, to have reactivated, with a website currently featuring several antisemitic tropes and images, including references to “globalists” and “cultural Marxists,” praise for Hitler, and images of people performing the Nazi salute.

Last year, we reported that the Royal United Services Institute (RUSI), a British think-tank, had published a report noting the “conspiracy theories propagated widely online” in connection with COVID-19 and calls for violence against minority communities, among them Jews. The report observed that “the pandemic has amplified antisemitic tropes and calls for violence against Jewish communities”, and also noted that there have been “calls online by groups such as the British National Socialist Movement for the virus to be ‘weaponised’”.