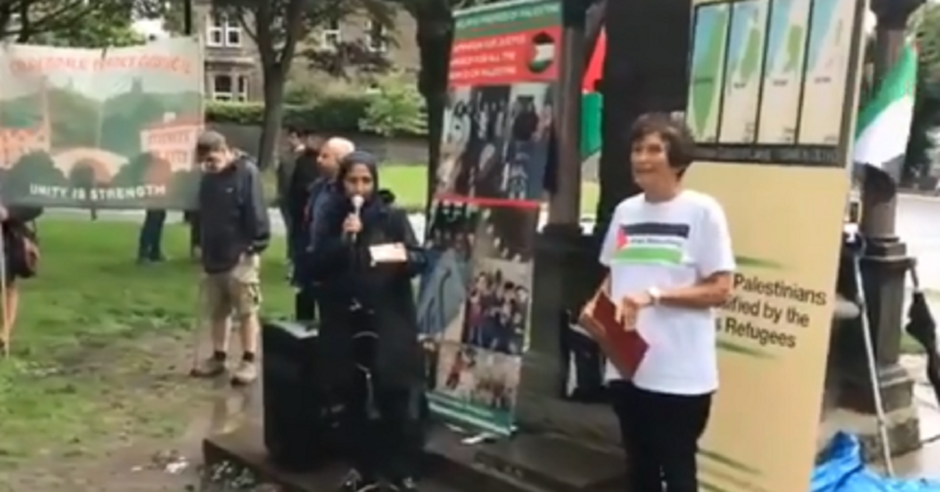 The Leader of Calderdale Council has refused to act against a fellow councillor who organised an anti-Israel rally last month, where it was reported that antisemitic chanting and a sign bearing a swastika were present, causing outrage.

Labour Party Cllr Tim Swift was urged by members from both the Conservatives and the Liberal Democrats to take action against councillor and Cabinet member Jenny Lynn, who organised the event in Halifax, and who was allegedly filmed raising her fist in the air while the crowd chanted “from the river to the sea, Palestine will be free”.

The chant, “from the river to the sea, Palestine will be free”, only makes sense as a call for the destruction of the world’s only Jewish state – and its replacement with a State of Palestine – and is thus an attempt to deny Jews, uniquely, the right to self-determination.

It was also said that a sign depicting swastikas alongside former Israeli Prime Minister, Benjamin Netanyahu, on a wanted poster was present.

According to the International Definition of Antisemitism, which Calderdale Council has adopted, “Denying the Jewish people their right to self-determination” and “Drawing comparisons of contemporary Israeli policy to that of the Nazis” are both examples of antisemitism.

It is understood that one of the invited speakers at the event was the disgraced conspiracy theorist Rev. Dr Stephen Sizer who, in 2015, was ordered by the Church of England to stop using social media after he claimed that an Israeli conspiracy was behind 9/11, which the Church denounced as “clearly antisemitic”.

Holly Lynch, the Labour MP representing Halifax, was also due to speak but said on Twitter that “upon seeing the speaker list” for the rally, she was “very clear” that she would “not share a platform with one of the speakers” and refused to attend.

Mr Swift was contacted by Liberal Democrat leader Cllr Baker and Conservative group leader Steven Leigh, who both urged him to take action.

Cllr Baker said: “Last year the whole council agreed to adopt the IHRA definition of antisemitism. Some of the views expressed by speakers at this event would clearly be seen as antisemitism under this definition. We are pleased to see Holly did not share a platform with them but it’s not acceptable that a Labour councillor and Cabinet member was involved in organising this.”

Ms Lynn appeared to deny any wrongdoing, stating: “There is nothing incompatible about my role as chair of a community based organisation – Halifax Friends of Palestine – and my role in supporting all our communities and I will stand on my record on that. There is nothing antisemitic about standing up for the rights of Palestinian people.”

Lord Austin, an honorary patron of Campaign Against Antisemitism who quit the Labour Party in opposition to antisemitism, said: “Of course Cllr Lynn cannot be the Cabinet member for Communities and take part in events like this. The council leader needs to act.”

However, Mr Swift declined to take action on Cllr Lynn, saying that “Councillor Lynn has a long track record of working for equality and cohesion in Calderdale, both as a community activist and a councillor, and has a proven record of working in harmony with people of all faiths and none”.

In July, Hastings Council reportedly refused to condemn the same antisemitic “from the river to the sea” chant.

Ben & Jerry’s Chair accused of self-dealing as her institution is revealed...
Scroll to top