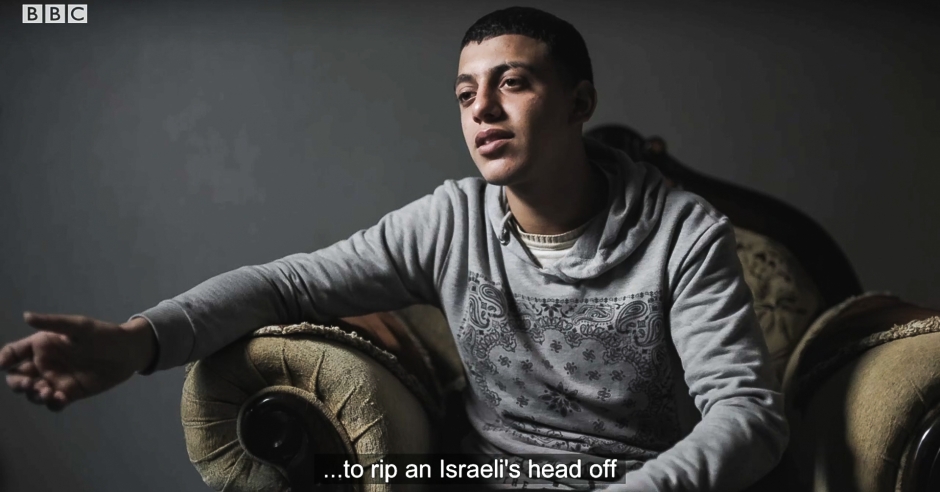 On six separate occasions during a programme commissioned by the BBC to mark last year’s riots on Gaza’s border with Israel, the Arabic word for ‘Jew’ was translated as ‘Israeli’ in an apparent attempt to sanitise the rioters’ hatred of Jews. During the programme, entitled One Day in Gaza, the rioters spoke about their involvement in the riots, the protestors referred to ‘Yahudi’, or its plural ‘Yahud’. The only correct translation of this is ‘Jew’ or ‘Jews’, however, the BBC made the editorial decision to substitute ‘Israeli’ or ‘Israelis’ in its subtitled translation, in an apparent attempt to give the impression that Hamas supporters want to kill Israeli Jews but not Jews elsewhere.

In one interview, a young Palestinian man describes in Arabic how “The revolutionary songs excite you, they encourage you rip a Jew’s head off.” The translation provided by the BBC replaced “Jew” with “Israeli”.

In another clip, a Palestinian woman tells the interviewer, “When we wanted to cross the fence, some of us distracted the Jews with stones and Molotov Cocktails.” Again, the translation was shown as “Israeli” instead of “Jew”.

The population of Israel includes Jews, Christians, Muslims and people of other faiths. The BBC’s substitution of ‘Israeli’ for ‘Jew’ appears to be a deliberate attempt to whitewash the murderous antisemitism of Hamas supporters. Hamas is proscribed as a terrorist organisation and seeks the genocide of all Jews worldwide.

Campaign Against Antisemitism will be making a formal complaint to Ofcom about the BBC’s misleading reporting of this highly sensitive issue.

Glyn Secker, who said Jewish organisations are “in the gutter” and “part...
Scroll to top