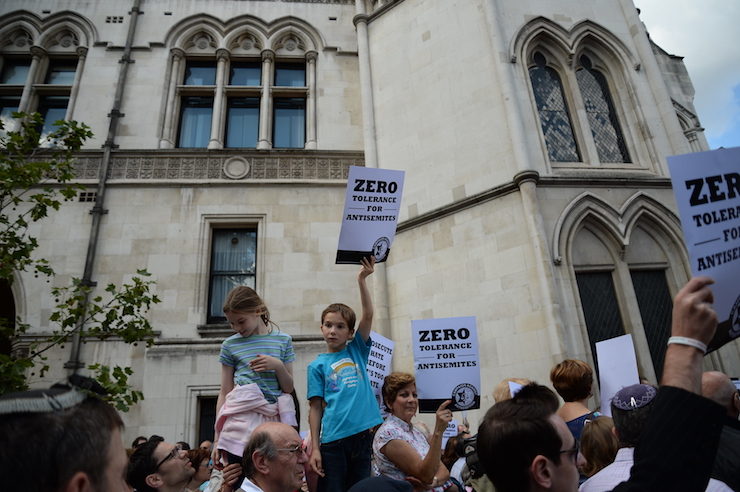 Since its establishment two years ago, Campaign Against Antisemitism has been dedicated to exposing and countering antisemitism through education and zero-tolerance enforcement of the law. Everything we have achieved has been accomplished by our dedicated team of volunteers.

We are proud of what we have achieved without a single member of staff, but the time has come to hire our first part-time employee to run our long-term programmes.

We welcome Ben, our Programme Manager. Binyomin has volunteered with us for over a year and passionately believes that it is possible to turn the rising tide of antisemitism through raising awareness of the problem, education and the firmest possible enforcement of the law. He has quickly established himself as a key member of our team, developing our long-term programmes and working with our volunteer team to greatly improve our capabilities.

We also welcome Stephen Silverman to the Board of Trustees, following his election by our volunteers to the new post of Director of Investigations and Enforcement. Stephen and his team work closely with police forces around the country, the Crown Prosecution Service and regulatory bodies to ensure that antisemitism is detected, investigated and punished with the full force of the law.

We must also say farewell to two of the people who have helped lead Campaign Against Antisemitism and who are now standing down. Jonathan Sacerdoti has acted as Director of Communications since soon after our establishment, building Campaign Against Antisemitism’s strong voice against antisemitism, and for the past year and a half Angela Levin has been our Director of Mobilisation, putting in place an extremely talented and committed team of volunteers.

Lastly, Nathan Hopstein, who has been an integral member of the Campaign Against Antisemitism team since our establishment two years ago, has moved into the new position of Director of Organisation and Finance, ensuring that we put in place the systems and support that our volunteers need, and that our charity complies strictly with regulatory and financial requirements.

Gideon Falter, Chairman of Campaign Against Antisemitism said: “Campaign Against Antisemitism owes a great deal to Jonathan and Angela. We have accomplished so much together and the Board of Trustees wishes them every success in their professional work. Jonathan has expertly developed our voice in the media, and Angela has established our effective teams of specialist volunteers. They leave our charity stronger than ever, and on that note we are extremely pleased to have secured the talents of Binyomin and Stephen. Binyomin has worked closely with Angela for over a year as a volunteer and in his capacity as Programme Manager we are already witnessing the implementation of ambitious long-term programmes. I also welcome Stephen, one of our longstanding volunteers, to the Board of Trustees, having been elected by the Investigations and Enforcement team to lead their vital work.”

Stephen Silverman, Director of Investigations and Enforcement said: “I became a volunteer with Campaign Against Antisemitism because I believe passionately that the unprecedented rise of antisemitism in Britain in recent years is a threat not only to Britain’s Jews but also to the very values of the country itself. We have reached a dangerous tipping point where antisemitic opinions — sometimes disguised as political discourse but often not — are on the the verge of becoming normalised on social media, in public life and on university campuses. Last year’s 51% increase in violent attacks on Jews shows the extent to which antisemites have become emboldened. Our Investigations and Enforcement team will continue work with the the police, regulators and employers to secure justice against antisemites, and where necessary we will hold the authorities to account.”

Jonathan Sacerdoti said: ”After two years heading up the media strategy for Campaign Against Antisemitism, it is with some sadness that I announce my resignation. Campaign Against Antisemitism was born out of a need for a strong voice opposing antisemitism in the UK and beyond, at a time when levels of antisemitism and attacks on Jewish people have been increasing across Europe. I feel that I and our team of volunteers have exceeded all expectations in getting antisemitism recognised more widely on the national agenda, and while there is still much to be done, I feel it is time for me to move on and concentrate on my full time journalistic career. Having established the voice of the Campaign Against Antisemitism across national and international media outlets, I know that media and political discussion of this important issue will continue, and I wish the rest of the team success in their continued work.”

CAA responds to claim in The Guardian that CAA is a pawn of the Israeli gov...

2016 Antisemitism Barometer: have your say on antisemitism in our 3-minute ...
Scroll to top