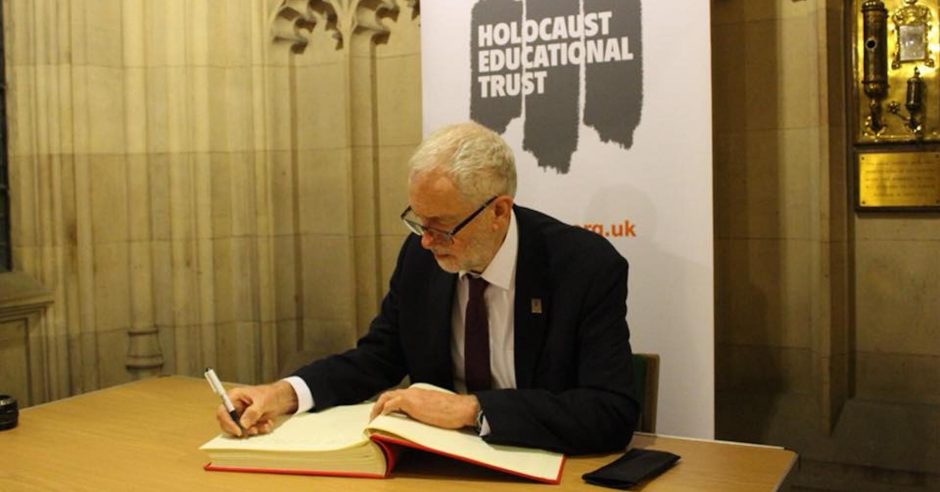 When Jeremy Corbyn wrote a statement in the Holocaust Educational Trust memorial book which omitted any mention of Jews and antisemitism, Campaign Against Antisemitism and a number of other Jewish organisations around the world, such as the Anti-Defamation League, condemned him.

We were astounded that Mr Corbyn had followed in the footsteps of Canadian Prime Minister Justin Trudeau in 2016 and US President Donald Trump in 2017, especially in the light of the chronic antisemitism scandal engulfing the Labour Party.

Then yesterday, on Holocaust Memorial Day, Mr Corbyn issued a new statement which explicitly spoke of the powerful words of hope by Jewish victims, writing: “As we remember the victims of evil, we salute the power of humanity and solidarity embodied in these words by our Jewish brothers and sisters, which still resonate once the hate-filled banalities of their tormentors are long forgotten.”

Jeremy Corbyn has now made a clear and thoughtful reference to Jews, so the question is now whether we and Jewish organisations around the world overreacted.

Objectively, it is clear that the collective reaction of Jewish organisations to Mr Corbyn’s failure to mention Jews in his message in the memorial book was different to the Chief Rabbi’s or the Prime Minister’s. Diagnosing the reason for that difference is important.

Mr Corbyn has presided over an unprecedented tolerance by a modern British political party for anti-Jewish racism. After action was not taken against numerous antisemites in the Labour Party, he commissioned the Chakrabarti report. The report was a whitewash and its author was reportedly told in advance that she would earn a peerage from it. Now, under conditions of secrecy recommended by the report, we do not know what is being done about the many cases of antisemitism waiting to be heard. However, we do know that Ken Livingstone, who claimed that Hitler “was supporting Zionism”, was not expelled from the Party despite the objections of 107 Labour MPs who said “we will not allow it to go unchecked” before mostly falling silent. Nor has the Party yet dealt with figures such as Jackie Walker. We also know that Mr Corbyn and his allies have been dismissive of allegations of antisemitism for a long time, and have had trouble speaking about the Party’s antisemitism problem without alluding to far less evident issues with Islamophobia and “racism in all its forms”. This is compounded by the fact that Mr Corbyn already sought out and defended antisemites from Raed Salah to Reverend Stephen Sizer, long before he was in the political spotlight.

For these reasons, Campaign Against Antisemitism and other Jewish organisations around the world are particularly concerned about Mr Corbyn. In this instance, Mr Corbyn has a defence that he did just the same thing as others whom we have not criticised, but context is everything and the heightened concern of Jewish organisations worldwide has not sprung from nowhere. However, upon reflection, on this occasion we expressed our concerns in a manner that was open to allegations of double standards, and that was a mistake.

Comment: We must not betray Holocaust survivors by allowing supporters of those...