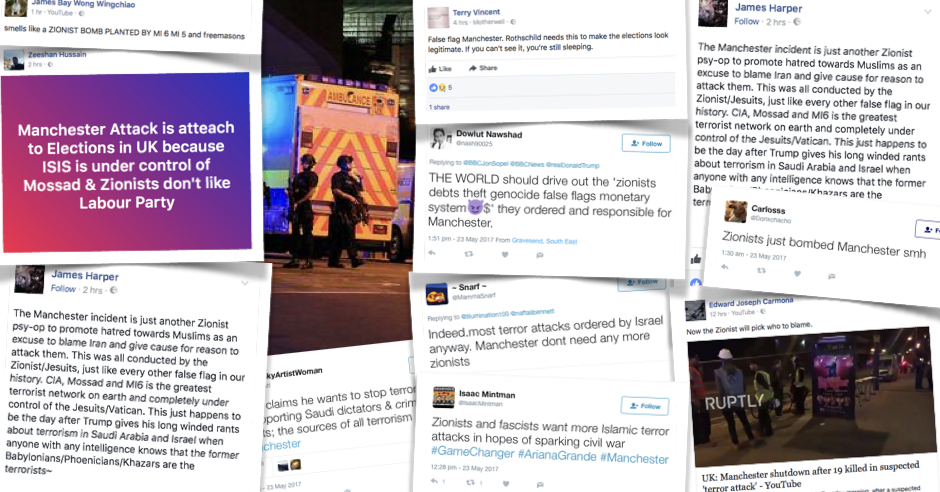 As Britain mourns those murdered in the terrorist atrocity in Manchester and treats the injured, antisemites have poured onto social media to blame the attack on a murderous Jewish conspiracy.

All of us at Campaign Against Antisemitism deplore the sickening attack on children and their families in Manchester last night. As the details of the attacker’s cowardice and barbarity became clear, and we heard the stories of families never to be reunited and casualties whose lives will be forever changed, we also began to see the all-too-familiar phenomenon of people rushing to social media to blame Jews.

Whilst politicians urged unity and “#WeStandTogether” trended on social media, people from around the world took to Twitter, Facebook and other platforms to claim that the suicide bombing was a plot by Jewish conspirators to fuel wars against oil-rich Muslim states, or some other variant of the depraved conspiracy myths that place Jews at the centre of the world’s every ill.

Over on Facebook, Oxford-educated “James Harper” posted his theory that “The Manchester incident is just another Zionist psy-op to promote hatred towards Muslims as an excuse to blame Iran and give cause for reason to attack them.” “Terry Vincent” posted: “False flag Manchester. Rothschild needs this to make the elections look legitimate. If you can’t see it, you’re still sleeping.” “Zeeshan Hussain” decided that the attack was a Zionist plot against the Labour Party, posting: “Manchester Attack is atteach [sic] to elections in UK because ISIS is under control of Mossad and Zionists don’t like Labour Party”. He gave his post a colourful background to make sure that it stood out. “Shaji Mohammad Khan” posted his own lengthy hypothesis, beginning: “More false flag propaganda.. Another MOUSSAD [sic] cooked Hollywood productions.. Wait ‘til they spice the story, as they detail it.. They always start with a bang, and then slowly pretend to investigate and follow clues to some made up MUSLIM name, and profile…” Meanwhile, “James Bay Wong Wingchiao” posted: “Smells like a ZIONIST BOMB PLANTED BY MI6 MI5 and freemasons”. “Edward Joseph Carmona” was similarly sure of Zionist involvement, posting: “Now the Zionist will pick who to blame.”

According to the International Definition of Antisemitism, “Making mendacious, dehumanising, demonising, or stereotypical allegations about Jews as such or the power of Jews as collective — such as, especially but not exclusively, the myth about a world Jewish conspiracy or of Jews controlling the media, economy, government or other societal institutions” is antisemitic, as is “Accusing Jews as a people of being responsible for real or imagined wrongdoing committed by a single Jewish person or group, or even for acts committed by non-Jews”.

It is absolutely right that in the aftermath of this attack, British people should stand together. Indeed the only positive news to emerge has been story after story about individual acts of heroism and generosity.

Yet as the social media giants and our police forces mobilise to ensure that British Muslims do not suffer a backlash following this terrorist attack, we hope that they will show the same diligence in protecting Jews from those who seek to incite hatred against us.

If you would like to join our Online Monitoring and Investigations Unit, our Crime Unit or one of our other teams, please volunteer now.

Trump claims he wants to stop terrorists. how? by supporting Saudi dictators & criminal zionists; the sources of all terrorism #Manchester

@BBCJonSopel @BBCNews @realDonaldTrump THE WORLD should drive out the 'zionists debts theft genocide false flags monetary system?$' they ordered and responsible for Manchester.

Police looking for man who shouted “I want to rape the little Jewish girls”...