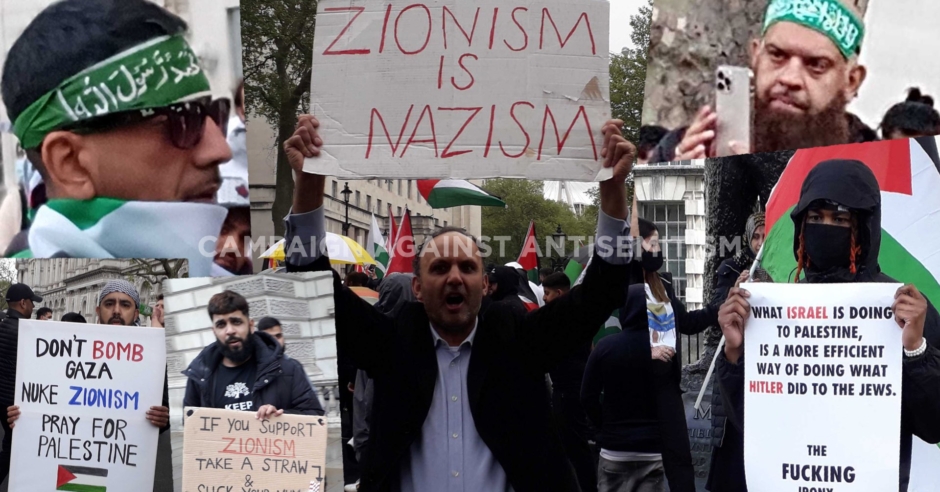 Campaign Against Antisemitism is calling for an immediate police crackdown on a convoy that drove through Jewish neighbourhoods in North London this afternoon shouting antisemitic chants through a sound system, concluding with a rally at Downing Street.

The convoy of some 200 cars displaying Palestinian Authority flags is understood to have driven from Bradford, Sheffield and Leicester down the M1 motorway before veering into Hendon and Golders Green, two of North London’s Jewish neighbourhoods. According to witnesses, convoy participants shouted to Jewish passers-by “Free Palestine! Go back to Poland” and other antisemitic chants.

The convoy then headed down Finchley Road and into St John’s Wood. A stone’s throw from a synagogue in West Hampstead, the convoy blared from a megaphone: “F*** the Jews…f*** all of them. F*** their mothers, f*** their daughters, and show your support for Palestine.” The speaker went on to call listeners to “Rape their [the Jews’] daughters”.

Local Jewish residents have contacted us expressing their terror at the convoy.

The convoy then reached Downing Street to join a rally, which was monitored by Campaign Against Antisemitism’s Demonstration and Event Monitoring Unit.

We filmed one protester yelling that Jews should “Go back to all the sh**y countries you came from”.

The protest featured numerous antisemitic signs, including several equating Israel to Nazis. According to the International Definition of Antisemitism, “Drawing comparisons of contemporary Israeli policy to that of the Nazis” is an example of antisemitism.

Attendees of the rally were also seen wearing Hamas-style headbands. Hamas is an antisemitic genocidal terrorist group, which over 90% of British Jews would like to see proscribed in its entirety by the British Government.

In a statement on Twitter, the Metropolitan Police said: “We are aware of a video appearing to show antisemitic language being shouted from a convoy of cars in the St John’s Wood area this afternoon. Officers are carrying out urgent enquiries to identify those responsible. This sort of behaviour will not be tolerated.”

The Home Secretary, Priti Patel, also weighed in, saying: “This is disgusting antisemitism. There is no place for this hatred in the UK. I expect @metpoliceuk to be taking this seriously.”

Prime Minister Boris Johnson has also released a statement, saying: “There is no place for antisemitism in our society. Ahead of Shavuot, I stand with Britain’s Jews who should not have to endure the type of shameful racism we have seen today.”

Even Sir Keir Starmer, whose MPs have played no small part over the past week in inflaming the situation we are now witnessing, described the scenes as “Utterly disgusting. Antisemitism, misogyny and hate have no place on our streets or in our society. There must be consequences.” It remains to be seen whether those consequences will apply to his own Parliamentary colleagues.

Today’s rally came a day after another rally in Central London featured antisemitic placards, terrorist emblems and genocidal anti-Jewish battle cries, which all went completely unchallenged by the crowd, whose leaders claimed to be avowed anti-racists.

Gideon Falter, Chief Executive of Campaign Against Antisemitism, said: “This convoy and demonstration were utterly predictable and preventable. They have been advertised for a week. Jews have had to witness the shocking reality that in 2021, people can drive through the capital of our country calling for our daughters to be raped, with nobody in sight to protect us or take action. There must be an immediate police crackdown on those responsible for these acts of Jew-hatred, and an inquiry into why the Metropolitan Police Service permitted these protests to go ahead without proper measures in place to stop this criminality, in full knowledge that today’s scenes were likely to the point of certainty. Britain’s Jews will not wait until this persistent antisemitic incitement leads to violence. We pray that it will not take bloodshed on our streets before the authorities realise they have let this go too far. These antisemitic thugs must face the full force of the law.”

Witnesses should call the police and contact us at [email protected].

CAA publishes resource for pupils and parents as reports grow of harrowing antisemitism...