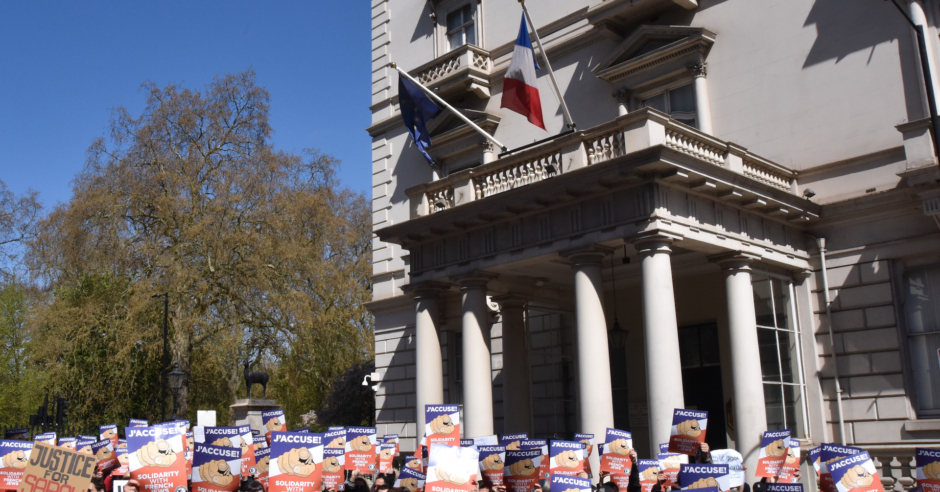 Campaign Against Antisemitism held a rally in solidarity with French Jews yesterday in opposition to the Court of Cassation’s ruling to let Sarah Halimi’s murderer go free.

In 2017, Ms Halimi, a 65-year-old Jewish woman, was murdered by her 27-year-old Muslim neighbour, Kobili Traoré, after he tortured and hurled her from a window to her death. In December 2019, France’s lower court ruled that Mr Traoré could not be held to stand trial as he was under the influence of cannabis at the time, which was said to have affected his judgment. The lower court’s ruling was upheld by France’s Court of Cassation late last week, sparking outrage across Jewish communities.

The rally took place outside the French Embassy in Knightsbridge, with protesters holding placards bearing the words “J’accuse! Solidarity with French Jews” and “Je Suis Sarah Halimi”. Due to COVID-19 restrictions, attendance was by registration only, with all places taken within 24 hours of our announcing the rally, with a significant waiting-list. A further 10,000 supporters demanding justice for Sarah Halimi watched the event across Campaign Against Antisemitism’s social media channels.

The rally in London was part of a global movement of rallies in Paris, Marseille and other French cities, Tel Aviv, New York City, Miami and Los Angeles.

Beginning with a moment of silence for Sarah Halimi, a variety of speakers were then introduced, including Chief Executive of Campaign Against Antisemitism, Gideon Falter, actress Dame Maureen Lipman, and Founder of the Hexagon Society, Sophie Weisenfeld. Other speakers included political commentator and YouTuber Raphael Landau, and activist and Trustee for Muslims Against Antisemitism (MAAS), activist Liz Arif-Fear.

The rally criticised not only the Court’s ruling in the murder case but also the treatment of French Jews in general. Addressing this issue in her speech, Dame Maureen accused France of “putting your knee on the neck of the Jewish race. Under such blind and bigoted injustice, we too cannot breathe. Nous ne pouvons pas respirer.” Dame Maureen and Mr Falter also both observed how there has been worldwide solidarity against some forms of racism over the past year but global silence over antisemitic injustice.

Ms Arif-Fear spoke passionately, stating: “Sarah Halimi’s family deserve justice…the murderer must face justice…I, and my colleagues at MAAS, will always stand with our Jewish brothers and sisters. We believe that we’re stronger together, and we want Jews across Britain, France, wider Europe, and the world to know that you do have allies.”

Mr Falter, detailing his own first-hand experiences of antisemitism in France, revealed harrowing accounts of heightened security in Jewish neighbourhoods and synagogues being firebombed, before adding: “It’s shameful that today in the European Union, in Europe, in the world, we have a leading country, like France, where Jews are in fear.” Mr Landau echoed this sentiment in his remarks.

The speeches can be watched in full on our YouTube channel.

Lawyers for Dr Halimi’s sister have announced that they will be bringing a lawsuit under Israeli law to convict Mr Traoré, and are considering an appeal to the European Court of Human Rights. Dr Halimi’s sister, Esther Lekover, is an Israeli citizen and the lawyers stated that they intend to make use of an Israeli law that allows them to take action over the murder even though it was committed outside of Israel.

Risk of censure for abusing Jews is proof of Jewish power, Jordanian professor...