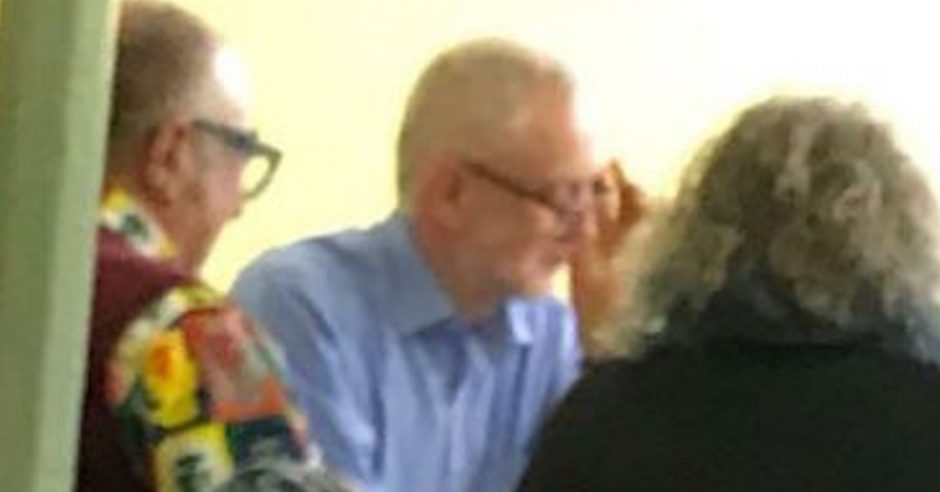 Jeremy Corbyn has been photographed attending a secretly-recorded event by “Jewdas” last night in which the names of those involved with the recent “Enough is enough” demonstration were booed and which ended with the shout of “Enough is enough, f*** you all, chag Pesach sameach [happy Passover]”.

Jewdas is a fringe Jewish group which appears to pride itself, as its name suggests, in taking positions that many in the Jewish community would see as a betrayal. For example, it has suggested that Campaign Against Antisemitism is run as a money-making scam by its volunteers, has said that “Israel is itself a steaming pile of sewage which needs to be properly disposed of”, and claimed that those calling out antisemitism in the Labour Party are “playing a dangerous game with people’s lives” before claiming that the entire crisis is a “bout of faux-outrage” that “is the work of cynical manipulations by people whose express loyalty is to the Conservative Party and the right wing of the Labour Party”.

According to the political blog, Guido Fawkes, which broke the story, Mr Corbyn brought beetroot from his allotment.

Mr Corbyn and his allies have made a habit of embracing fringe Jewish groups which harshly attack Jews who criticise his leadership, such as Jewish Voice for Labour, whilst shunning Jewish organisations which criticise him.

Gideon Falter, Chairman of Campaign Against Antisemitism, said: “Given the antisemitism crisis engulfing the Labour Party, there is absolutely no way that Mr Corbyn can claim that this too was an oversight. Following the events of the past few weeks and indeed the past three years, this is a very clear two fingered salute at mainstream British Jewry. It is hard to imagine how this duplicitous man can claim to be remedying antisemitism within the Labour Party. The Party must consider the message that is sent to British Jews and other minorities by him remaining as Leader.”

This Sunday, 8th April, at 2pm, Jews and non-Jews alike will converge in London from all over Britain to stand up for our Jewish community and drive home to Labour that they must deliver on their broken promise: zero tolerance for antisemitism. Join us.

Please register for updates on the venue and speakers at antisemitism.org/demonstration.

Jeremy Corbyn chose to go to Seder night with Jewdas – fringe community group whose Pesach greeting to the community was and I quote “Enough is enough. Fuck you all” The man has no shame

Update on the national demonstration at 2pm this Sunday, calling on Labour to...

CAA calls for Jon Lansman to be disciplined over secretly-recorded claim that...
Scroll to top