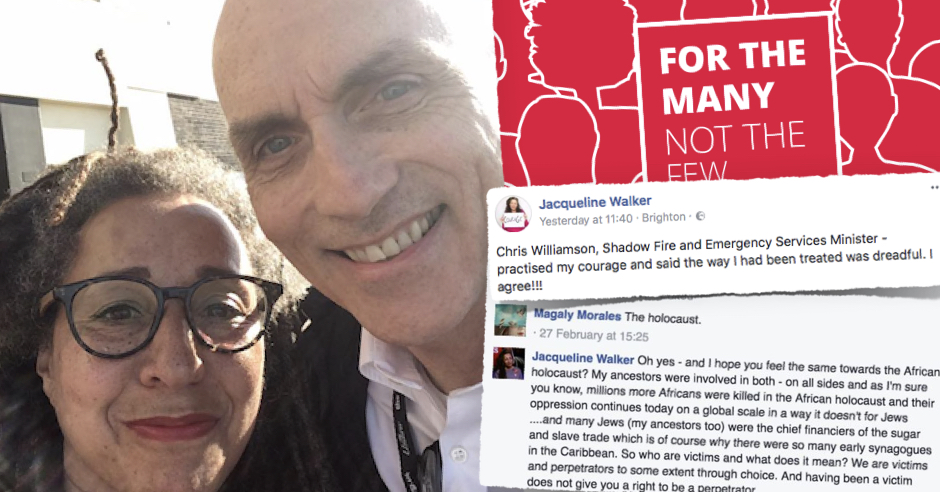 Chris Williamson, the Member of Parliament for Derby North and Shadow Fire and Emergency Services Minister, has defended disgraced suspended Labour activist Jackie Walker according to a post by Ms Walker on Facebook.

Ms Walker posted a photo on Facebook from the Labour Conference hugging Mr Williamson along with a message of solidarity: “Chris Williamson, Shadow Fire and Emergency Services Minister — practised my courage and said the way I had been treated was dreadful. I agree!!!” We assume that Ms Walker meant “praised” instead of “practised”.

We have sought a comment from Mr Williamson, who has so far not replied.

Ms Walker was suspended by Labour in September 2016 following comments she made about Holocaust Memorial Day at the Labour Party Conference. Ms Walker said that Holocaust Memorial Day is not inclusive enough and that Jewish schools do not need special security in the face of threats. She reportedly claimed that antisemitism was being “exaggerated” and that the “aim of such allegations is to undermine Jeremy [Corbyn].” She also claimed that “many Jews”  were the “chief financiers” of the African slave trade.

Mr Williamson to the Guardian in August that the controversy surrounding Jeremy Corbyn’s handling of antisemitism within Labour was “proxy wars and bulls***”. He went on to say: “I’m not saying [antisemitism] never ever happens but it is a really dirty, lowdown trick, particularly the antisemitism smears. Many people in the Jewish community are appalled by what they see as the weaponisation of antisemitism for political ends. It is pretty repellent to use that to attack somebody like Jeremy Corbyn, who has spent his whole life fighting for social justice and standing up for the underdog. But I feel people have stopped listening to the smears and lies and dirty tricks…”

Ms Walker will also be performing her one-person show, “The Lynching” on the fringe of the Labour Party Conference. The show purports to expose the “witch hunt” she says she has been subjected to over allegations of antisemitism. Labour MP John Mann attacked her performance as a “sad and miserable way of hiding from antisemitism”.

Ms Walker is believed to be suspended from the Labour Party and awaiting a disciplinary hearing, which makes her warm embrace from Mr Williamson and the fact that she is staging her show all the more perturbing.

Tense scenes and dismay from Jewish delegates at Labour Party Conference as...
Scroll to top