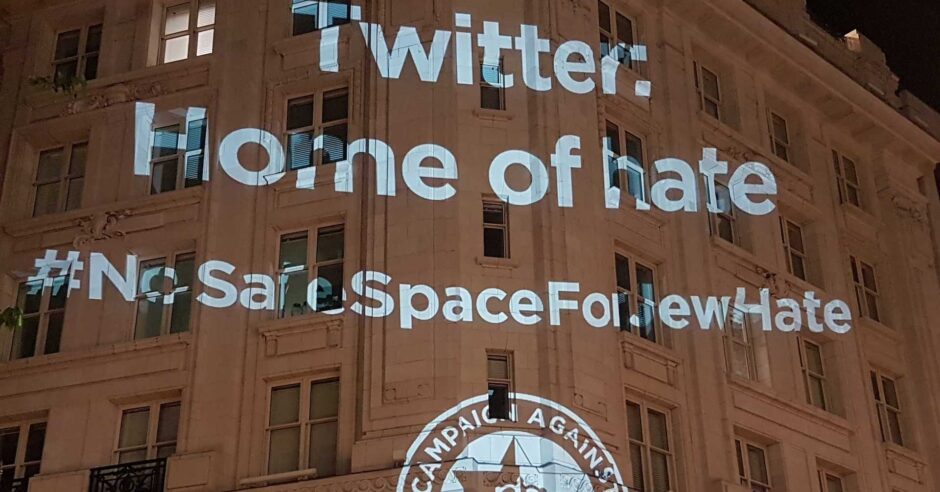 Twitter has permanently deleted antisemitic performer Wiley’s account. They did so following discussions with Campaign Against Antisemitism under immense pressure amid a worldwide 48-hour boycott of Twitter under the hashtag #NoSafeSpaceForJewHate.

Last night, Campaign Against Antisemitism went to Twitter’s London headquarters to shine a light on the company after it failed so spectacularly to address racist incitement on its platform.

Numerous examples of antisemitic tweets were projected onto Twitter’s building in an effort to embarrass Twitter into cleaning up the mess that it has enabled and allowed to fester online.

The video can be watched here.

A spokesperson for Campaign Against Antisemitism said: “Following discussions with Campaign Against Antisemitism, during which we made clear that the beginning of their path to building faith would be the removal of Wiley’s account, this morning Twitter has finally listened. The closure of Wiley’s account is too little too late, but it is at least a start for this deeply irresponsible social network.

“After Twitter’s abysmal response to blatant anti-Jewish incitement on its platform, last night we decided to literally shine a light on the company and project onto its London headquarters some of the hateful tweets that Twitter permits on its platform.

“From their pitiful responses to the hate spewed daily on their platforms, it is evident that social media companies will stop at nothing to make a profit. It is time for these deeply damaging and irresponsible companies to be held accountable for the hatred they help to spread.”

Campaign Against Antisemitism and others walked out from Twitter, Instagram and Facebook for 48 hours from Monday morning as part of a #NoSafeSpaceForJewHate campaign following the social media platforms’ failure to take appropriate action against racism on their websites.