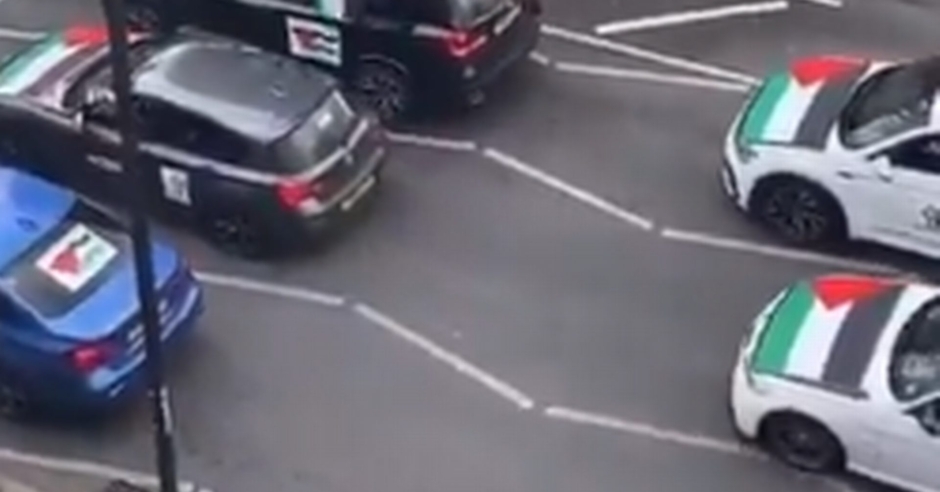 A Jewish mother has told of her terror at being chased down a London street and rammed whilst driving her four-year-old child to see friends.

The victim wrote that at 14:24 on Sunday, she was driving her child to a friend’s house, when she noticed two cars draped in flags of the Palestinian Authority. She wrote: “I turned right and both cars started to chase me down the road and rammed into the back of my car. As I approached the light, I put my foot on the accelerator and sped through a red light, trying to make my way through the traffic. I turned into my friend’s road, but the cars continued to chase me. Once again I found myself with my foot flat on the accelerator racing down the road to try and find somewhere safe. Thankfully I found a small ally where I parked my car behind a large truck. I called my friend to check the cars had gone and made my way to his home to calm down.”

Earlier that day, cars festooned with Palestinian Authority flags drove through Jewish neighbourhoods shouting from a megaphone: “F*** the Jews…f*** all of them. F*** their mothers, f*** their daughters, and show your support for Palestine.” The speaker went on to call listeners to “Rape their [the Jews’] daughters”. Four men have been arrested and bailed.

Fortunately there were no injuries reported, though the victim’s car was damaged. The victim said of the incident: “We deserve to live in a country where we are protected…You will not intimidate me and my family.”

In a statement, the police said: “At around 15:00hrs on Sunday, 16 May, we received a report of a car being driven aggressively in Parsons Street, Hendon. It is alleged that it made contact with the rear bumper of another car.” The statement added: “As part of their investigation, officers will consider whether there is any link between this report and a convoy of vehicles that passed through North London on the same afternoon.”

Stephen Silverman, Director of Investigations and Enforcement at Campaign Against Antisemitism, said: “The victim was clearly very afraid for her and her child’s safety. It is very fortunate indeed that nobody was injured. Police need to restore law and order to our streets and defend the Jewish community from this kind of targeted violence. This is yet another incident arising from the protests this weekend in which people have felt able to commit criminal acts against British Jews, whilst masquerading as protesters. They are not protesters, they are criminals, and confidence in the police will rapidly fall if these people are not brought to justice.”

Witnesses should call the police and contact [email protected].

Four men arrested and bailed over antisemitic “F*** the Jews…rape their...