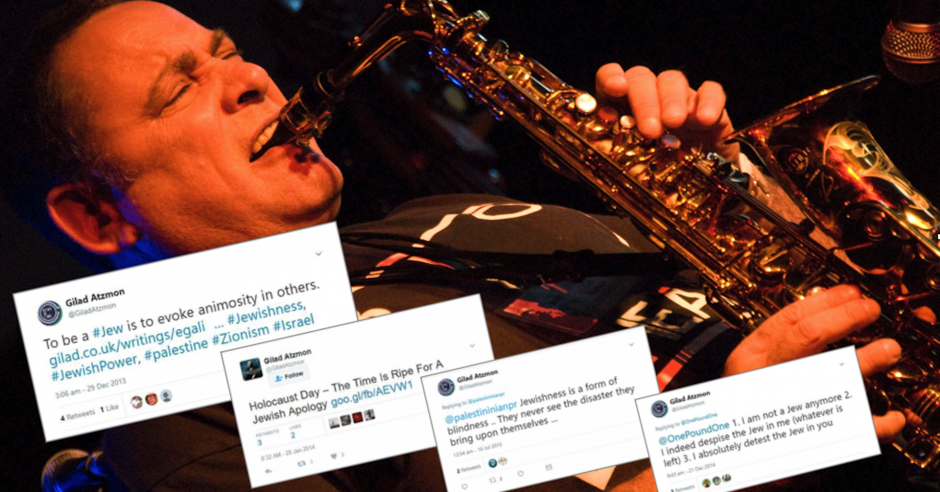 The iconic Chelsea jazz venue, 606 Club, has doubled down on its disgraceful invitation to the antisemitic saxophonist, Gilad Atzmon, to perform there with his band.

Mr Atzmon, billed as a “wonderful sax and clarinet player with a powerful sound and unique approach,” albeit one with “well-documented views on the Middle East that may provoke and challenge the listener,” will be performing at the club with his band on 1st February.

606 Club reportedly received a complaint from a regular patron regarding his views on the Holocaust. The saxophonist has previously denounced what he called the “Holocaust religion”.

But the club’s owner, Steve Rubie, defended Mr Atzmon, reportedly saying that although Mr Atzmon “sailed way too close to the wind sometimes”, nevertheless “having just spoken to Gilad he insisted he’s not racist and went to great pains to say that he does not have an issue with Jews, of which he is obviously one, the religion or the culture.” Mr Richie added that he had never heard Mr Atzmon speak pejoratively of Jews.

Mr Atzmon is reported to have blamed the Grenfell Tower tragedy on “Jerusalemites” as well as reportedly telling university students that “the Jews were expelled from Germany for misbehaving.” He is not shy about his antisemitism, telling a Jewish Twitter user in 2014: “I am not a Jew any more. I indeed despise the Jew in me (whatever is left). I absolutely detest the Jew in you.”

Following efforts by Campaign Against Antisemitism to have him banned from various musical venues, he penned an article in which he claimed that the then-Chairman of Campaign Against Antisemitism “fabricated” antisemitic incidents as part of a “business plan” to defraud the British taxpayer and earn money for himself. After being sued for libel, Mr Atzmon attempted to crowdfund “tens of thousands of pounds”, telling his supporters: “I have made the decision to fight this crucial battle for freedom of expression even though this fight poses a real risk of bankrupting me and my family.”

Faced with the impossible task of substantiating these libels, Mr Atzmon instead capitulated and agreed to settle the case, admitting that all of the claims were false and agreeing to pay substantial damages and costs. Mr Atzmon did not show his face in court, instead sending his solicitor to read an apology on his behalf.

Campaign Against Antisemitism will be writing to the venue.

Twitter apologises for allowing advertisements to be micro-targeted at neo-...