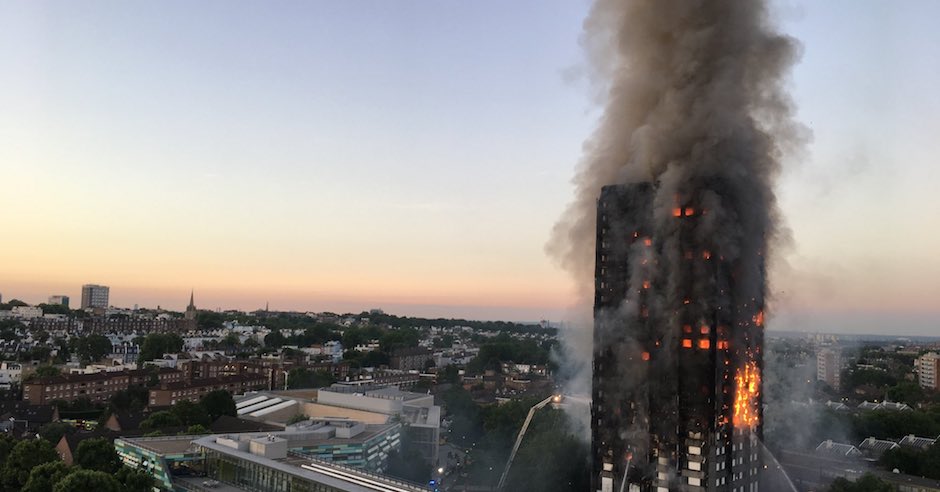 Notorious antisemite Gilad Atzmon, has reportedly claimed that the Grenfell Tower tragedy was the responsibility of “Jerusalemites” who were “following mitzvot” and blamed the Jews for the collapse of traditional left-wing politics. Mitzvot means commandments, and is a word normally used to describe the biblical rules that Jews obey.

Campaign Against Antisemitism wrote to the Reading International Solidarity Centre before the event to alert them that Gilad Atzmon is a notorious antisemite. We also lodged a formal complaint with the Charity Commission following the event.

According to a report in the JC, during the 90-minute speech, Mr Atzmon attempted to blame the Grenfell Tower tragedy “on people who could be characterised as those who followed ‘commandments’”. He reportedly discussed what he described as a difference between critical thinkers whom he labelled “Athenites” and the “Jerusalemites” who followed “mitzvot.”

He explained how it was related to the Grenfell Tower tragedy: “Very simple. People who think things through, who understand about responsibility and morality and ethics don’t clad buildings all over the country with flammable materials. But when it happens, it is ‘We were following regulations, we were following mitzvot.’” He reportedly continued: “Athens and Jerusalem is not Jews versus goyim [non-Jews] or Jews versus gentiles. Athens and Jerusalem is thinking things through as opposed to following regulations, mitzvot, commandments, laws. The Ten Commandments is Jerusalem. I don’t need you to tell me I should not kill. Athens is ethics, Jerusalem is anti-ethics.”

“Jerusalemites” were not necessarily Jews, Mr Atzmon said, claiming: “It’s not Jews and gentiles because Tony Blair is not a Jew and he’s a Jerusalemite.”

Mr Atzmon reportedly talked about Zionist power and control, alleging that a global pro-Israel lobby dominates politics: “Even the democratic process does not really matter. If you vote Labour, the policies are shaped by Labour Friends of Israel, if you vote Conservative it’s CFI [Conservative Friends of Israel]. The same thing happens in America, in France, and even Turkey is pro-Israeli now.”

He blamed “the Jews” for the collapse of the traditional left-wing politics that he said once appealed to him. He said “The Jewish lobby is a cosmopolitan lobby. It has turned every person in the universe [into] a tribe who operates like a Jew. Look at it: the gays are doing fine, the blacks are doing fine, the women are doing fine, but the Jews are doing really fine. They have a state, hundreds of atomic bombs, they have F16s, F35s [fighter aircraft]. How many gays have a state, an atomic bomb,  an army? How many blacks have a lobby that shapes American foreign policy so everyone is tribal like a Jew? But the Jews are doing way better than everyone else.”

In March this year, Mr Atzmon attended a talk at the London School of Economics with Richard Falk, the discredited and disgraced fringe antisemitic conspiracy theorist and the former UN envoy, where he reportedly told those around him that “the Jews were expelled from Germany for misbehaving.” Stunned audience members asked him to repeat what he had said and he did. Mr Atzmon was also reportedly heard recommending the works of disgraced historian David Irving, who in 2000 was proven in court to be an antisemite, a Holocaust denier and an admirer of Hitler. It is also reported that Mr Atzmon later said: “Jews are always expelled for a reason.”

In December 2014, he told a Jewish Twitter user, “I am not a Jew any more. I indeed despise the Jew in me (whatever is left). I absolutely detest the Jew in you.”

Another of his books, The Wandering Who, was described in 2011 as “quite probably the most antisemitic book published in this country in recent years.”

He has stated that Jews were responsible for their persecution by the Nazis, Jews should apologise for making gentiles hate them, burning synagogues is “a rational act”, Jews are trying to control the world, Jews are harming the planet, Jews caused the credit crunch, and Israel is worse than Nazi Germany. He has also trivialised the scale and impact of the Holocaust.

The International Definition of Antisemitism, adopted by the British government, states, among other things, that the following are antisemitic:

In March 2012, a collective of Palestinian writers and activists disavowed Mr Atzmon for his attacks on Jews and Judaism, as well as his denial of the Holocaust.

Mr Atzmon also performanced this past weekend at the Pizza Express Jazz Club in Soho in Central London. Before the event, Campaign Against Antisemitism wrote to the Chief Executive of Pizza Express, Jinlong Wang, to inform him that Mr Atzmon is a notorious antisemite.

Mr Atzmon should be shunned by any self-respecting decent venue and audience.

Having already written to the Charity Commission and donors to the Reading International Solidarity Centre, we will now do so again to bring these allegations to their attention.

You may wish to contact the Charity Commission, as well as the Reading International Solidarity Centre’s donors, Reading Borough Council, the Earley Charity, the European Union, the Naturesave Trust, Food 4 Families and the Big Lottery Fund.

CAA demands that Nigel Farage apologise for his deplorable claim that a “Jewish...