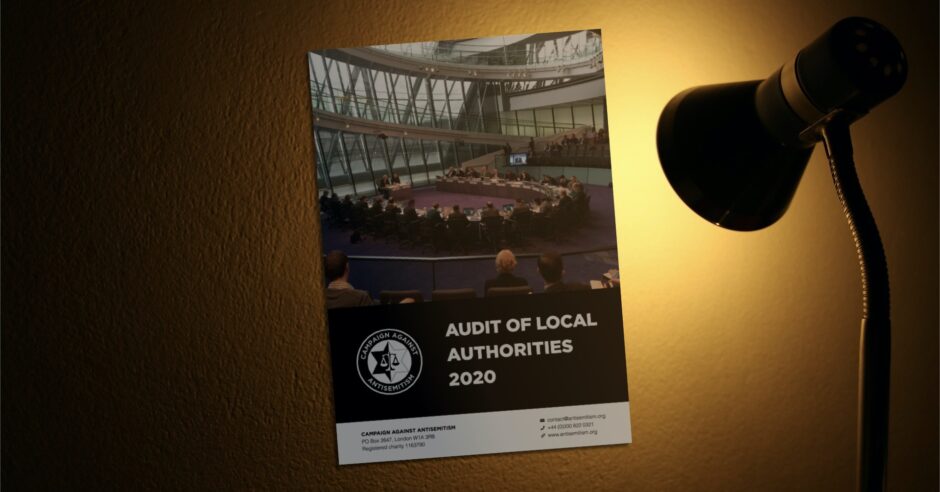 Today, Campaign Against Antisemitism publishes its report revealing the extent of adoption of the International Definition of Antisemitism by local authorities across the United Kingdom.

The report — the first of its kind — shows that the campaign for widespread adoption of the Definition is well underway.

Ever since Campaign Against Antisemitism led the effort for adoption of the Definition by the British Government — which became the first in the world to do so — two Secretaries of State for Local Government have joined our push for local authorities to follow suit. As this report shows, that campaign is yielding results, with much success owed to the work of grassroots local activists and organisations right across the country. We applaud them and the local authorities that have listened, but there remains much to do.

The current Secretary of State for Local Government, the Rt. Hon. Robert Jenrick MP, recently warned local authorities that those refusing to adopt the Definition would risk losing public funding. This report examines where pressure is needed by naming and shaming for the first time those local authorities that have failed to adopt the full Definition in line with Government policy.

The report — which finds that 121 of the 422 local authorities in the UK (29%) have adopted the Definition in full — gives a fuller picture of the fight against antisemitism at the local level, exposing which local authorities take this issue seriously and which do not, and enabling local activists and voters to make informed choices.

The purpose of adoption of the full Definition is not only to send a message of where local councillors stand on antisemitism but also to ensure that the Definition is applied in disciplinary cases involving councillors or staff. As this report shows, the number of local authorities that have actually incorporated the Definition into their codes of conduct for councillors and staff is negligible.

The report also discusses the shortcomings of the existing disciplinary and sanctions systems in place for dealing with misconduct by local councillors. Adoption of the Definition and its incorporation into codes of conduct are still insufficient if appropriate sanctions are unavailable and local councillors can engage in antisemitic conduct without consequence.

A separate Campaign Against Antisemitism project exposing antisemitism in political parties has shown just how extensive antisemitism is among local councillors and council candidates. Adopting and applying the Definition in antisemitism cases and enforcing judgments with real sanctions are critical if anti-Jewish hatred is to be eradicated from local politics in the UK.

British Jews should not have to endure antisemitism from their elected representatives, and all opponents of racism in our country should root out prejudice at any level of our politics. It is easy to say that antisemitism is unacceptable, but words must be followed by action. Widespread adoption of the Definition is the bare minimum.

If you would like to write to your local councillors or representatives in a devolved administration, please visit antisemitism.org/councils.

The report comes following a surge of antisemitism at the local level over the past years, which most recently has resulted in the resignation of at least one leader of a council and political control in at least two local councils changing hands.

Gideon Falter, Chief Executive of Campaign Against Antisemitism, said: “This ground-breaking report, which is the product of painstaking research by our team, shows that the campaign for widespread adoption of the International Definition of Antisemitism by local authorities across the UK is well underway. But the report also shows that there is still a long way to go: only 29% of local authorities have adopted the full Definition so far, a shortcoming that is national and cross-party.

“In support of the policy announced by the Secretary of State for Local Government, this report names and shames recalcitrant local authorities, and makes numerous recommendations. Above all, the report is designed to serve as an accessible resource for local media and members of the public, whom we invite to write to their local councillors to urge adoption of the Definition.

“The surge of antisemitism at the local level demonstrates just how essential it is for local authorities to adopt the Definition and, crucially, to incorporate it into their codes of conduct for councillors and staff. Antisemitism has no place in our political life, and that must include local politics as well.”

Wiley says “I was shut down by Facebook, and we all know who owns it”

CAA provides our ground-breaking report on adoption of International Definition...
Scroll to top