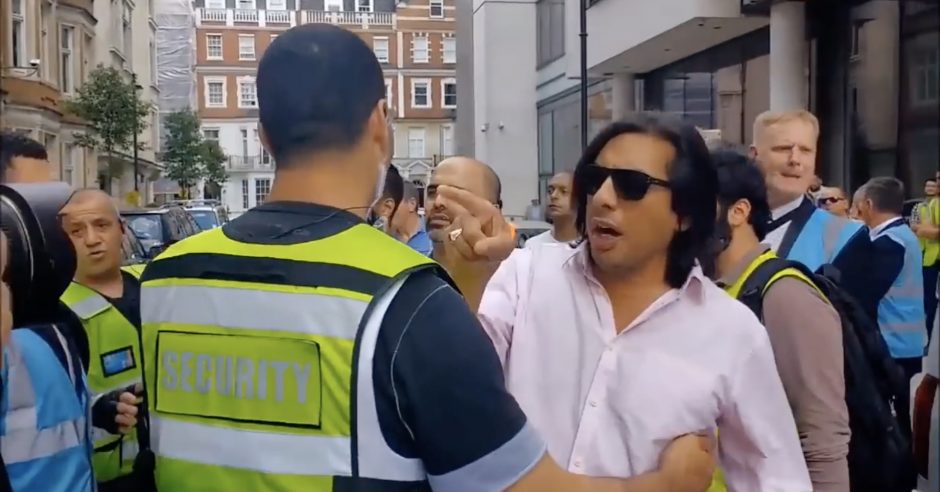 A pharmacist, Nazim Ali, who leads the annual “Al Quds Day” march through London, has been found to have brought the pharmaceutical profession into disrepute following a two-week hearing that culminated today arising from a complaint by Campaign Against Antisemitism.

However, the General Pharmaceutical Council’s (GPhC) fitness to practice tribunal let Mr Ali off with a warning after ruling that his remarks were grossly offensive and that his fitness to practise was impaired, but that his statements were not antisemitic.

Remarkably the GPhC did not present expert testimony from academics or Campaign Against Antisemitism on what constitutes Jew-hatred.

Campaign Against Antisemitism’s complaint related to Mr Ali’s actions in 2017, when he led the pro-Hizballah “Al Quds Day” parade for the controversial London-based organisation calling itself the Islamic Human Rights Commission, just four days after the Grenfell Tower tragedy in which over 70 people were burned alive.

Heading the parade, surrounded by the flags of Hizballah, the genocidal antisemitic terrorist organisation, Mr Ali shouted over a public address system: “Some of the biggest corporations who are supporting the Conservative Party are Zionists. They are responsible for the murder of the people in Grenfell, in those towers in Grenfell. The Zionist supporters of the Tory Party. Free, Free, Palestine…It is the Zionists who give money to the Tory Party to kill people in high-rise blocks. Free, Free, Palestine. From the river to the sea, Palestine will be free.”

At another point he told marchers: “Careful of those Rabbis who belong to the Board of Deputies, who have got blood on their hands, who agree with the killing of British soldiers. Do not allow them in your centres.”

The events were filmed by members of Campaign Against Antisemitism’s Demonstration and Event Monitoring Unit.

Mr Ali is the Managing Partner of Chelsea Pharmacy Medical Clinic. Campaign Against Antisemitism submitted a complaint to the GPhC, which confirmed that the matter “calls into question the pharmacy professional’s fitness to practise as a pharmacist.”

During Mr Ali’s hearing, his defence emphasised his grovelling apology, in which he acknowledged that his comments were grossly offensive and that they could be perceived as being antisemitic. Mr Ali claimed that he had not made the apology sooner because he had apparently been advised not to do so while legal proceedings were underway, even through those proceedings ended in early 2019 and the apology appeared to have only been issued a short time before the GPhC hearing.

Mr Ali’s defence also made much of his warm relationship with the extremist fringe Jewish group, Neturei Karta, as evidence that he would not have knowingly said something antisemitic, even though Neturei Karta condemns most Jews and has actively supported antisemites.

Mr Ali’s counsel spent the better part of two days arguing that the hearing was a breach of Mr Ali’s right to a private life and right to freedom of expression under Articles 8 and 10 of the Human Rights Act 1998, however the tribunal took a day to consider these arguments and rejected them.

Stephen Silverman, Director of Investigations and Enforcement at Campaign Against Antisemitism, said: “Since 2017, we have fought to ensure that Nazim Ali faces the consequences of his actions. As a pharmacist, he is bound by professional rules, and we are pleased that due to our complaint his regulator has now agreed that he brought his profession into disrepute. However it is disappointing that the regulator showed so little understanding of the issues at the hearing and only requested that the tribunal issue Mr Ali with a warning, which it did. After more than three years, at least we have succeeded in ensuring that Mr Ali’s record has been publicly marked and his disgrace made official.”

Campaign Against Antisemitism previously sought a criminal prosecution of Mr Ali. When the Crown Prosecution Service (CPS) refused to prosecute him, we launched a private prosecution which the CPS disgracefully used its statutory powers to take over and discontinue, protecting Mr Ali from prosecution.