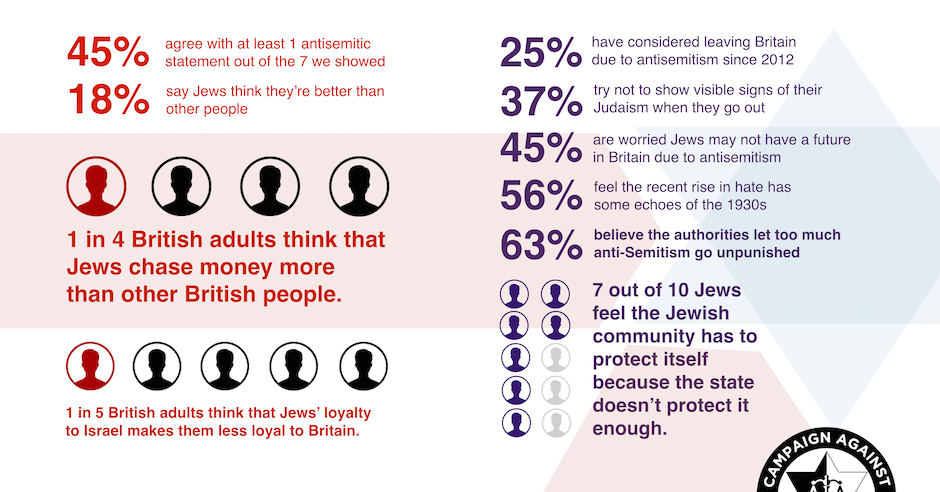 The Annual Antisemitism Barometer is the largest study of its kind. It reveals both the scale of antisemitic sentiment in Britain, and its effect on the increasingly-threatened British Jewish population.

Whilst antisemitism in Britain is not yet at the levels seen in most of Europe, the results of our survey should be a wakeup call. Britain is at a tipping point: unless antisemitism is met with zero tolerance, it will continue to grow and British Jews may increasingly question their place in their own country.

The year 2014 saw a record-breaking number of antisemitic incidents perpetrated against Jewish people and Jewish property in Britain. Antisemitism is usually most visible in Great Britain during crises involving Israel, but the sentiment behind it does not simply disappear when the crises end.

It was in response to this record-breaking wave of antisemitism that in August 2014, the Campaign Against Antisemitism organised a grassroots-led movement dedicated to identifying and combatting antisemitism of both a classical ethno-religious nature and also a political nature related to Israel.

Some antisemitic views may be totally unintentional but are no less offensive for it. Many people in the UK have simply never met Jewish people, and might have stereotypical ideas of them. This is a smaller problem which simply needs better education and discussion so that people can appreciate that, as with any minority group, Jewish people are not defined only by their religion or race. ‘Unintentional’ stereotypes should be highlighted more often, and those espousing them will be able to better understand that they are offensive.

To effectively fight antisemitism we must examine both its origins and its consequences. It is our hope that this study will shed light on both of these aspects of this pernicious form of racism, in order that we can reduce its presence in British society. Antisemitism is not a problem only for Jewish people, but for all of Britain, which must uphold its tradition of tolerance and pluralism.