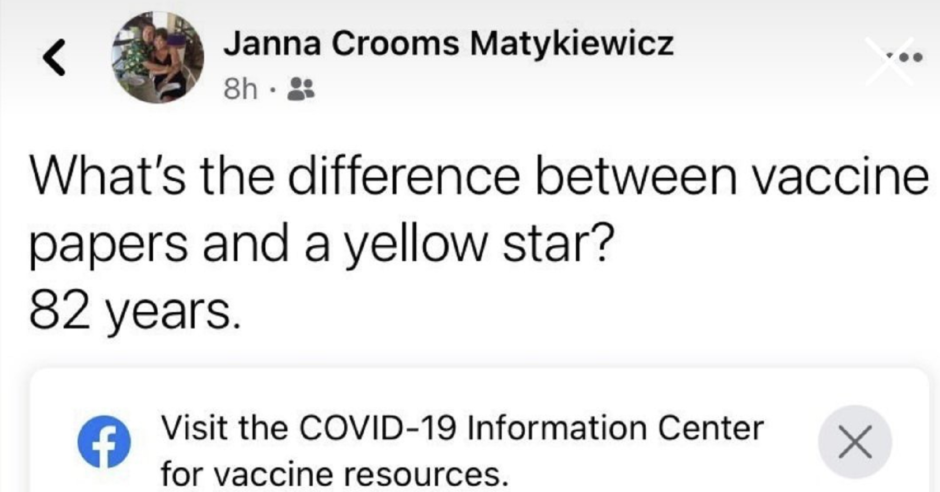 The Assistant Principal for Houston High School in Texas has been reassigned after an alleged Facebook post surfaced in which she compared vaccines to the Holocaust.

Houston High School Assistant Principal Janna Matykiewicz seemingly posted a Facebook status on 18th August that said: “What is the difference between vaccine papers and a yellow star? 82 years.”

The comparison has been made across the world, including in the United States, Canada, Ukraine and elsewhere, as anti-lockdown and anti-vaccination networks have become known as hotbeds of antisemitic conspiracy theories and tropes.

Germantown Municipal School District spokesperson Kate Crowder said this past Tuesday that “Ms. Matykiewicz is no longer an administrator at Houston High School, but is still employed by the district.” Crowder was said to have specified that Ms. Matykiewicz has been reassigned as a homebound teacher and interim liaison teacher. “Portions of the investigations are ongoing,” Ms Crowder added.

The creator of a Change.org petition titled “Fire Ms. Janna Matykiewicz” said that Ms Matykiewicz’s post was not only “a complete [sic] ignorant statement” but that it was “also completely antisemitic”. The creator also alleged that this was not Houston High School’s “first Holocaust-related incident” and asserted that the school’s yearbook featured people dressed up as Nazis.

It appears that a history teacher at the school, Tony Benzing, is also under investigation after he replied to her post with one of his own that read: “82 years…apparently a generation that doesn’t seem to know their History…the yellow star just targeted Jews…the vaccine papers don’t discriminate…but remember they first gamed the system to get Hitler appointed as Der Fuhrer, then they took over the media, police force, & educational system (Hitler Jugend)”

In June, the US State of Texas adopted the International Definition of Antisemitism.