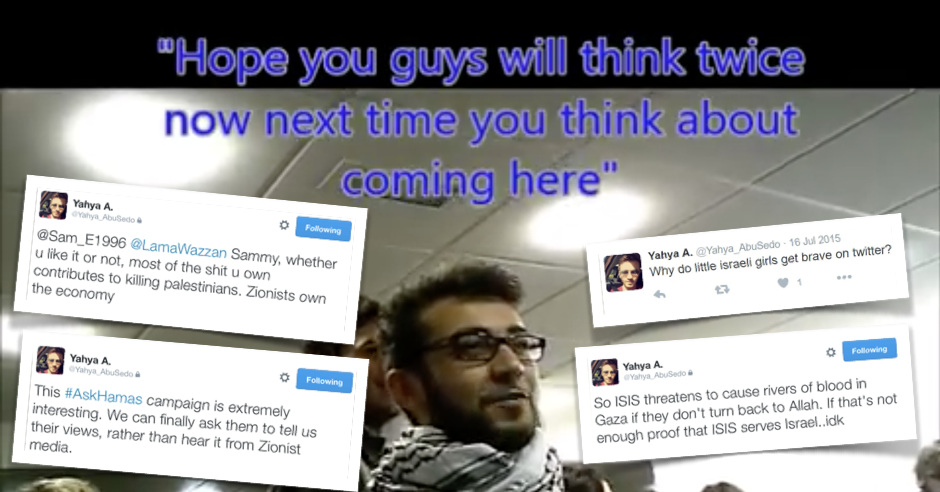 Campaign Against Antisemitism has referred the leader of a ‘violent’ protest at UCL last week to the Metropolitan Police Service and UCL over antisemitic tweets which have come to light.

The protest last Thursday against the presence of an Israeli speaker at the university reportedly resulted in three female students being assaulted, whilst protesters surrounded and trapped attendees despite efforts by university security and police to separate them from the protesters. At one point protesters jumped through a window to confront the terrified audience of predominantly Jewish students.

Now, Campaign Against Antisemitism has contacted the police and the university regarding security at the event, the conduct of the protesters, and in particular their leader, UCLU Friends of Palestine Society President Yahya Abu Seido. Though Abu Seido’s Twitter account is protected, CAA has obtained tweets stating that:

Several of the tweets are antisemitic according to the International Definition of Antisemitism.

CAA has also seen video footage appearing to show Abu Seido at the protest saying: “I hope you guys will think twice now next time you think about coming here.”

In a letter to UCL’s Provost, Professor Arthur, Gideon Falter, Chairman of Campaign Against Antisemitism called on him to take firm disciplinary action, writing: “The nature of the protest was intimidatory from the outset, and there is no question that attendees were terrified by the large mob of protesters seeking to surround and trap them.

“Footage of the protesters shows their leader telling attendees at the event: ‘I hope you guys will think twice now next time you think about coming here.’ Whereas criticism of Israel is not antisemitic, this protest was not criticism but part of a deliberate campaign of harassment and bullying, whose targets are overwhelmingly Jewish students. If reports that three female students were assaulted by the protesters are true, then that is a very serious matter, and the perpetrators must be expelled if they are found to be students.

“Jewish students are currently feeling threatened and isolated, not only at UCL but at universities around the country. UCL has the opportunity and the obligation to show in the firmest possible manner that those who bully, intimidate and harass Jewish students will suffer dire consequences for their actions, and that those who belittle or tolerate antisemitism will similarly be shown no quarter.”

The letter also called on UCL to investigate a statement by UCL Union which appeared to condone the protest.

Earlier this month, the House of Commons Home Affairs Committee released its report into the rise of antisemitism in Britain. In relation to antisemitism at universities, the Committee said that “The unique nature of antisemitism requires a unique response” and that “pro-Palestinian campaigns [must be educated so as to] avoid drawing on antisemitic rhetoric”.

When campus protests against Israel become violent and overwhelmingly target...