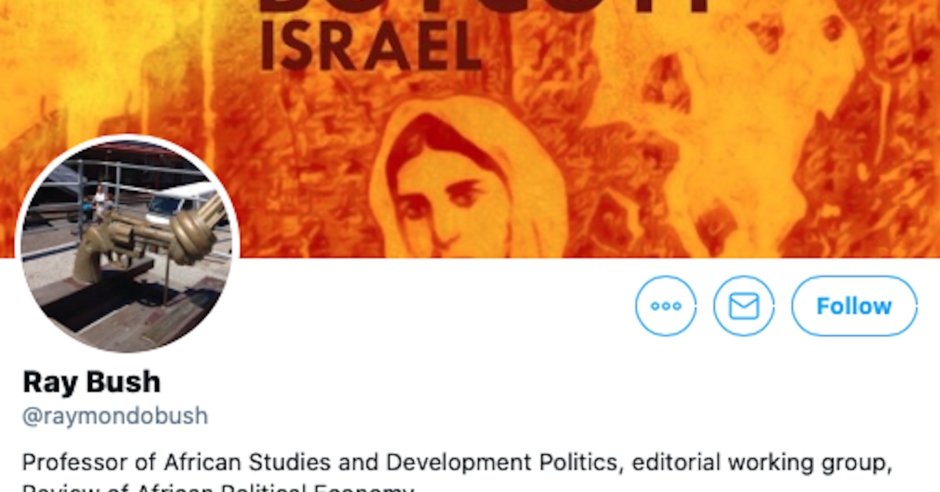 Campaign Against Antisemitism has written to the University of Leeds regarding a politics professor with a history of antisemitic tweets.

Ray Bush, Professor of African Studies and Development Politics, appears to have tweeted from the Twitter handle @raymondobush a large number of tweets that breach the International Definition of Antisemitism, which the University of Leeds recently adopted.

There are three types of breaches.

Second, Prof. Bush has breached the Definition by comparing Israelis and Zionists to Nazis. According to the Definition: “Drawing comparisons of contemporary Israeli policy to that of the Nazis” is antisemitic. He has done so here (“Does it take a nazi to recognise a #nazi #Israel #racism ?”) and here, for example.

Third, Prof. Bush has contravened the Definition by claiming that concerns about institutional antisemitism in the Labour Party, which were vindicated by the recent report of the Equality and Human Rights Commission, were due to a campaign run by the “Israeli embassy.” He has thus supported one of the oldest tropes used to justify acts of antisemitism – the discredited myth of a Jewish conspiracy in which Jews are disloyal and act as a fifth column against the interests of their home countries. The Definition states that: “Making mendacious, dehumanising, demonising stereotypical allegations about Jews as such or the power of Jews as a collective – such as, especially but not exclusively, the myth about a world Jewish conspiracy controlling the media, economy, government or other societal institutions” is antisemitic. He has done so, for example, here (“The reason they hate Corbyn of course is because he is anti #Zionist and the antisemitic campaign is ran by the #Israeli embassy among others) and here.

A spokesperson for Campaign Against Antisemitism said: “These posts are clearly in breach of the International Definition of Antisemitism. Anyone airing and disseminating dangerous antisemitic views such as those promoted by Prof. Ray Bush is not fit to be entrusted with the responsibility of teaching young people. For this reason, Prof. Bush must be held to account. Accordingly, we have written to the University of Leeds to request that it investigates and takes appropriate disciplinary action to protect Jewish students from Prof. Bush.”

Portugal’s first Holocaust Museum to open this week in Oporto

“Zionist Brain” Professor at University of California Merced will not teach... Scroll to top