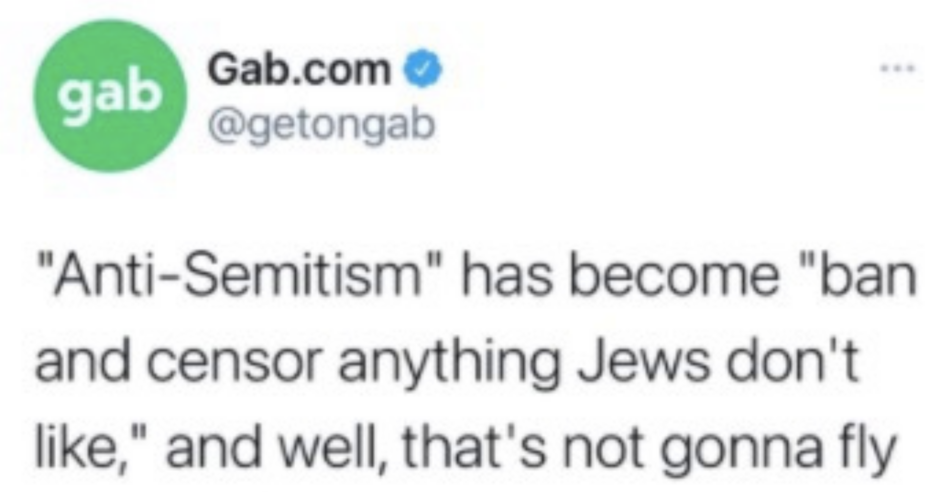 Gab is a social-media platform that was founded in 2016 with a claim to “champion free speech,” and has become a haven for supporters of the QAnon conspiracy theory and other far-right groups and individuals banned from mainstream platforms.

The inflammatory tweet reads: “‘Antisemitism’ has become ‘ban and censor anything Jews don’t like,’ and well, that’s not gonna fly on a pro-first amendment pro-free speech website. Sorry.”

The post continues: “Use the block button, or stay on Twitter. No special privileges on Gab for any groups.”

While Gab proclaims to be “pro-free speech,” others have described the network as racist and alleges that it promotes several conspiracy theories.

Earlier this year, the founder of Gab, Andrew Torba, was accused of wooing far-right figures to his platform with promises of greater visibility.

Far-right figures have turned to sites such as Gab to avoid restrictions on hate-content on more mainstream platforms such as Facebook and Twitter. Mr Torba has tried to distance Gab from the far-right groups that have made it their home. In 2018, on a podcast, he said: “Do we have alt-right users? Certainly. Alt-right users also exist on Facebook, on Twitter, on Reddit, and everywhere else on the Internet.” He went on to insist that Gab had “good people” who “believe in individual liberty…and free expression.”

Campaign Against Antisemitism has long called for tougher regulations on social media sites and that social networks proactively search for and remove hate speech from their platforms.

“Are you even from this country?” Jewish England fan abused at Wembley