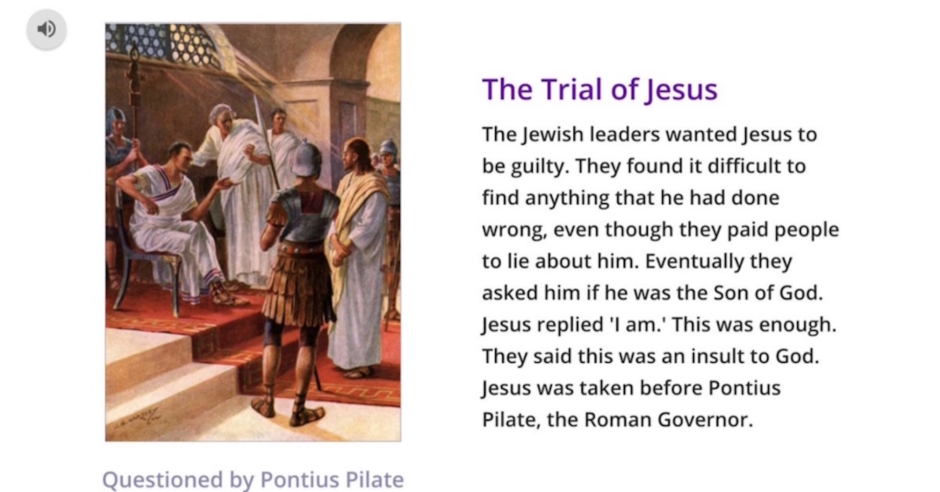 An educational resource site and the headteacher of a primary school have apologised after seven-year-olds were handed homework teaching them that the Jews killed Jesus.

Joanne Bell, the mother of a child who was handed the sheet, posted a picture of the antisemitic homework to Twitter. It showed a drawing with a depiction of Jesus standing in front of Roman leader Pontius, whilst a hook-nosed Jew is bending down to whisper to Pontius in a conspiratorial manner.

Alongside, the text reads: “The Jewish leaders wanted Jesus to be guilty…eventually they asked him if he was the son of God. Jesus replied ‘I am’. This was enough. They said this was an insult to God. Jesus was taken before Pontius Pilate, the Roman Governor. The Jewish people, who wanted Jesus to die, persuaded the people to set free a murderer called Barabbas. Pilate asked what he should do with Jesus, known as ‘king of the Jews’. ‘Crucify him!’ shouted the people.”

Ms Bell wrote: “Got to love Britain, doing my child’s RE [Religious Education] home-schooling today. Why not teach the Blood Libel, hey. What harm has it ever done to portray Jews as bloodthirsty and solely responsible for the death of the believed son of G-d, Jesus. I am in shock. This for seven-year olds.”

Topmarks – the education website responsible for creating and distributing the homework – blocked Joanne when she raised the issue, but it unblocked her a day later, with the head of the company tweeting an apology.

He wrote: “Hello Joanne. Sorry for the delay, I’ve been unwell post-vaccine. We are sorry for any offense to or misrepresentation of the Jewish community, it was not our intention, and we have removed the Bible story. Thank you for bringing it to our attention. I have unblocked you.”

Another user then asked why Ms Bell had been blocked in the first place, to which Mr Spolton replied: “It was an unnecessary mistake.” When Ms Bell questioned how the material ended up on the website in the first place, Mr Spolton replied: “I was young and naive. It was written circa twenty years ago based on books found in the local library, and the dated images were downloaded clip art. I literally hadn’t reviewed the story for decades and had pretty much forgotten about it. I’m glad you contacted me with your concerns and that I’ve been able to remove it quickly.”

Ms Bell, who has done a service by drawing attention to this material, updated followers as the homework was pulled from the primary school – which Ms Bell has not named – with an apology from the “horrified” headteacher.

A spokesperson from Campaign Against Antisemitism said: “The notion that the Jews killed Jesus is an antisemitic trope which dates back millennia. It has been used as a supposed justification for the persecution of Jews in the Christian world for centuries and is often cited in abuse of Jews even today. It is sickening that this material was presented to young children as factual education. The apologies from Topmarks and the school in question are welcome, as is the withdrawal of the textbook, but educational material for children, particularly in sensitive fields, must be written and vetted by reliable experts. For Topmarks to be offering materials that, by its own admission, were created by someone so ‘naive’ as to present a blood libel as fact, and not to review those materials in decades is unacceptable.”