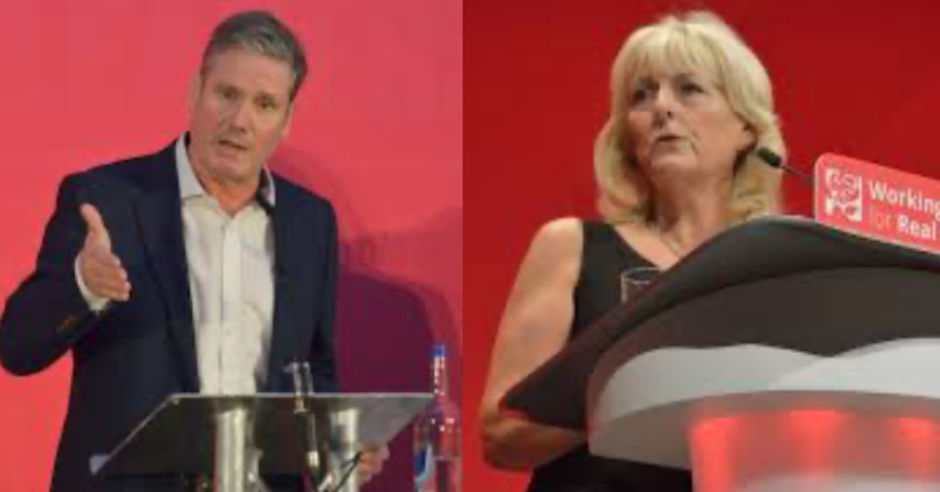 Today is the one-month anniversary of Sir Keir Starmer’s election as Leader of the Labour Party, and Campaign Against Antisemitism has marked the occasion by writing to him welcoming his promises and apology to the Jewish community but denouncing his failure to follow up with real action against antisemitism. The text of the letter can be read below.

Jennie Formby’s resignation as General Secretary of the Labour Party today brings an end to her controversial term in office, when Labour’s headquarters operated as a guardian of antisemites and abuser of whistleblowers. Her departure opens the way for the independent disciplinary process that Sir Keir has promised to introduce and is a vital first step in restoring Labour’s credibility.

A spokesman for Campaign Against Antisemitism said: “Jennie Formby’s resignation today as General Secretary of the Labour Party brings an end to her ignominious tenure, during which she oversaw a Party apparatus that shielded antisemites and intimidated whistleblowers. Her departure comes on the one-month anniversary of Sir Keir Starmer’s election as Leader of the Labour Party, an occasion we have marked by writing to Sir Keir condemning his promotion of Afzal Kahn to prominence in the Shadow Cabinet and his failure to suspend Diane Abbott, Bell Ribeiro-Addy and Salma Yaqoob, in direct contravention of his election pledge. We also await the promised introduction of an independent disciplinary process, which Ms Formby’s welcome departure now makes possible. Sir Keir’s honeymoon is over and he must now move swiftly to reassure the Jewish community that he is serious about tearing antisemitism ‘out by its roots’.”

Full text of the letter

We are writing to you on the one-month anniversary of your election as leader of the Labour Party.

As you will doubtless have seen, we have been at the forefront of exposing institutional antisemitism within the Labour Party. To that end, we referred the Party to the Equality and Human Rights Commission, instigating its statutory investigation into antisemitism in Labour after the Party refused to investigate our disciplinary complaints against Jeremy Corbyn. As the sole complainant in the Commission’s statutory investigation and an apolitical and specialised organisation in this field, we have provided considerable evidence and expertise to assist the Commission. It is disappointing that, in spite of our role as the complainant in the Commission’s investigation, we have not been contacted by you or any member of your team since you took office one month ago.

Our ambition is to safeguard the Jewish community, uphold British values of tolerance and decency and help Labour return to its fiercely anti-racist past. We welcomed your victory speech and were encouraged by your newspaper article addressing the Jewish community. As you correctly recognised, after the Labour Party caused so much sorrow and fear amongst Britain’s Jewish minority, it is incumbent upon you not only to make promises and apologies — welcome though they are as a first step — but to take firm action against antisemitism.

We noted that during your time by Mr Corbyn’s side you took no public action to call out or oppose antisemitism within the Party, however we have attempted to consider your record as leader of the Labour Party in its own light.

Whilst we recognise that we are currently in a state of national emergency, this cannot be an excuse for failing to address Labour’s endemic racism problem. We are now writing to you because we are increasingly concerned by your apparent continued inaction against antisemitism over the course of your first month as Leader. In this connection, we wish to raise three specific matters.

First, we were pleased to see that among your first acts, you excluded a number of troubling individuals from your Shadow Cabinet. However, we are concerned to see that you have still chosen to reward highly problematic figures, notably Afzal Khan MP, whom you have appointed as Shadow Deputy Leader of the House of Commons. Promoting Mr Khan, who has posted on social media about a supposed “Israel-British-Swiss-Rothschilds crime syndicate” and “mass murdering Rothschilds Israeli mafia criminal liars” is inconsistent with tearing antisemitism “out by its roots”, as you promised to do.

Second, having pledged to suspend from Labour any MP or member who shares a platform with former members who were expelled in the wake of antisemitic incidents, you have nevertheless elected to take no action against Diane Abbott MP, Bell Ribeiro-Addy MP and Salma Yaqoob. As you know, last week they (along with numerous other less high-profile Labour members) participated in an online conference with Jackie Walker and Tony Greenstein, two prominent Labour activists who were expelled from the Party in connection with antisemitism. We also note that Ms Yaqoob, who ran to become Labour’s candidate for West Midlands Metro Mayor, was also advertised to appear on another platform on 12th May with Mr Greenstein before withdrawing after we and others publicised it. It is critical that, having only weakly reprimanded these figures, you now take immediate action consistent with your pledge and suspend Ms Abbott, Ms Ribeiro-Addy and Ms Yaqoob.

Third, you have not announced any timetable to introduce an independent complaints process, something that is urgently needed and which you rightly recognised as a prerequisite to restoring Labour’s credibility. We note that Jennie Formby has today resigned as General Secretary, having disgracefully presided over the most opaque and unjust disciplinary system that we have encountered in any political party, by some considerable margin. As we have a number of cases that we wish the Party to investigate and act upon, we urgently await the introduction of a disciplinary system that the Jewish community and the wider public can trust.

You pledged to take “personal responsibility” for rooting out antisemitism in the Labour Party and, though your messaging has been clear and we have welcomed it, we have yet to see you take any real action.

It is a matter of deep regret that we are forced to doubt the seriousness of your pledges so soon after your election.

We look forward to hearing from you.