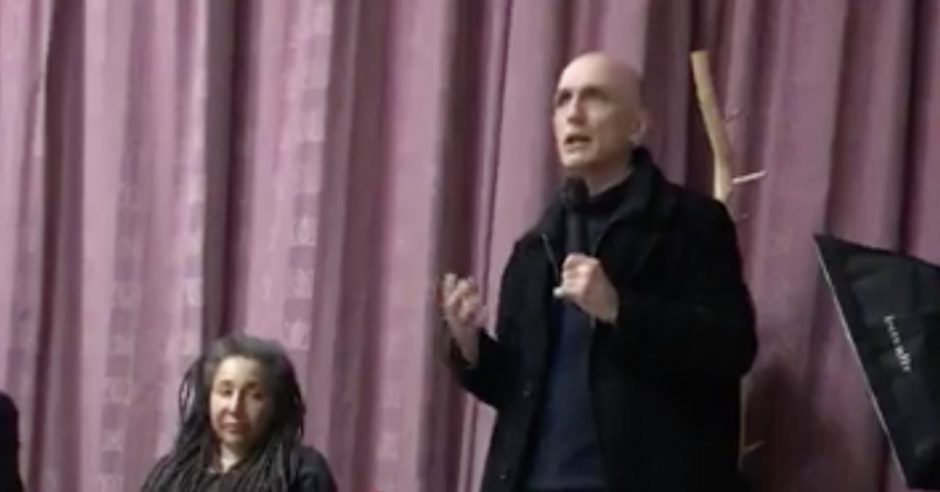 Labour MPs are clamouring for their colleague, antisemite-befriender and Labour MP for Derby North, Chris Williamson, to be suspended or expelled from the Party, after he was caught on video saying that the Labour Party has been “too apologetic” over antisemitism. He has issued a meandering apology but still appears to be intent on screening a film about Jackie Walker in Parliament. Jackie Walker, a friend of Mr Williamson, has been suspended for years by the Labour Party which still appears to be mustering the will to discipline her over her claims about Jews.

The video, which was released by the Yorkshire Post, shows Mr Williamson telling activists at an event in Sheffield last week organised by the campaign group Momentum, that Labour was being “demonised as a racist, bigoted party.” Momentum supports Mr Corbyn’s leadership of the Party.

To raucous applause, Mr Williamson told the gathering that: “The Party that has done more to stand up to racism is now being demonised as a racist, bigoted party. I have got to say I think our Party’s response has been partly responsible for that because in my opinion…we have backed off far too much, we have given too much ground, we have been too apologetic.” He then claimed that: “We’ve done more to address the scourge of antisemitism than any political party.”

Following uproar from Labour MPs – including, Tom Watson, Deputy Leader of the Labour Party, who said that Mr Williamson had been “deliberately inflammatory” – Mr Williamson apologised. In a lengthy statement on Twitter, he wrote: “I deeply regret, and apologise for, my recent choice of words when speaking about how the Labour Party has responded to the ongoing fight against antisemitism inside of our Party. I was trying to stress how much the party has done to tackle antisemitism.” He added that: “I am therefore sorry for how I chose to express myself on this issue within our Party. This is a fight that I want to be an ally in. In future, I will take it upon myself to be more considered in my remarks, and ensure they reflect the Labour Party’s unswerving and unfaltering commitment to anti-racism and the fight against antisemitism.”

In the past six months, eleven MPs have quit the Labour Party over its institutional antisemitism.

One of them, Luciana Berger, tweeted in response to Mr Williamson’s video: “This is what I have left behind. It’s toxic. Our country deserves so much better.”

Labour figures have also spoken out. Labour MP Wes Streeting tweeted: “I do not believe this is sincere. I believe you have deliberately baited Jewish people in our Party and across the country. I think you were caught in a moment of honesty saying what you really think. It was repulsive, revealing and you should be expelled from the Labour Party. ” Former Labour Leader Ed Miliband, who is Jewish, tweeted: “Chris Williamson is bringing the Labour party into disrepute over anti-semitism. This is a test of seriousness on our part about the whole issue. Disciplinary action, not simply an apology, is required.” Mr Watson added: “It is not good enough. If it was in my gift I would have removed the whip from him already. Yvette Cooper joined, tweeting: “Agree with Tom Watson & Ed Miliband on immediate suspension needed”.

It has also emerged that Mr Williamson has reportedly booked a committee room in the House of Commons next Monday for a screening of the film, Witchunt, about antisemitism and the disgraced Labour activist Jackie Walker, who famously claimed that Jews were the “chief financiers of the slave trade”. Mr Williamson has previously said that Ms Walker’s suspension was “disgraceful.” He booked the room on behalf of the sham Jewish Voice for Labour, which has continually downplayed Labour’s problem with antisemitism.

A Labour spokesperson said that: “It’s completely inappropriate to book a room for an event about an individual who is suspended from the Party and subject to ongoing disciplinary procedures. This falls below the standards we expect of MPs.”

The event is still going ahead.

A spokesman for Jeremy Corbyn said that Mr Williamson has been issued with a “notice of investigation for a pattern of behaviour” by Labour. He will not be suspended during the investigation.

Campaign Against Antisemitism has referred the Labour Party to the Equality and Human Rights Commission, which is now due to decide whether to open a full statutory investigation into antisemitic discrimination and victimisation within the Party.

Elderly man reportedly attacked in Islington and left with blood pouring from...

The suspension of Chris Williamson only now, under duress, shows once again... Scroll to top