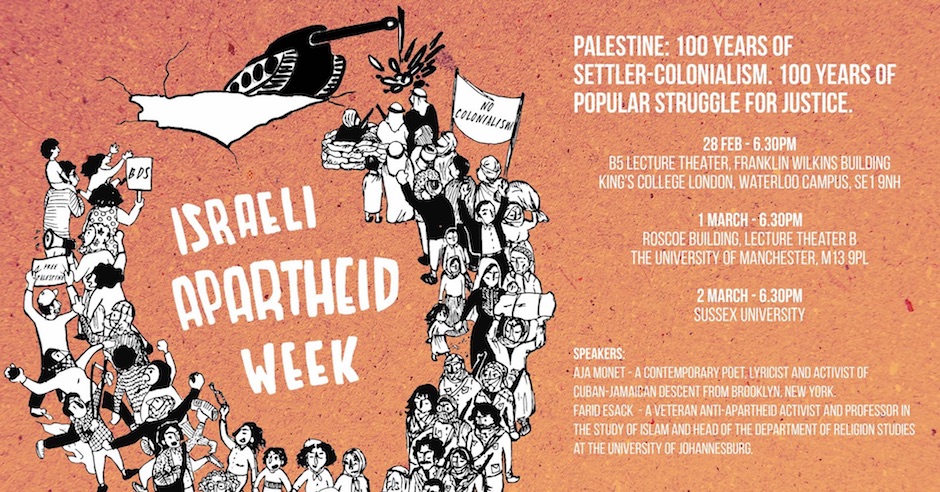 Friends of Palestine societies from Kings College London, the University of Manchester University and the University of Sussex are rolling out the red carpet to for a roadshow event organised as part of ‘Israeli Apartheid Week’. The lectures, billed as “Palestine: 100 Years of Settler-Colonialism. 100 Years of Popular Struggle for Justice”, will be held in London on 28th February, Manchester on 1st March and Sussex on 2nd March.

Campaign Against Antisemitism calls on the universities to cancel these events following the precedent set by the University of Central Lancashire, which cancelled an ‘Israel Apartheid Week’ event for contravening the International Definition of Antisemitism adopted by the British Government.

The event description invites students to “Join campaigners in the Movement for Black Lives in the United States, South Africa and the Palestinian-led Boycott, Divestment and Sanctions (BDS) movement for a discussion on the Palestinian struggle for justice. The Palesitnian [sic] people have been struggling against settler-colonialism for 100 years. How can we support their struggle for liberation and build powerful movements against racism and oppression?” This makes it very clear that the event is not only opposed to particular Israeli policies such as the construction of settlements, but to the existence of the state of Israel, which will celebrate its 69th birthday this year, within any borders. Under the International Definition of Antisemitism, it is antisemitic to seek the destruction of Israel or claim that its creation was a racist endeavour.

The speakers at all three events are deeply concerning. Aja Monet, described as a “poet and activist with Dream Defenders, part of the broader Movement for Black Lives” tweeted on 23rd August 2011: “@mikeschreiber lol…lies. you jews and your lies.” The tweet she appears to have been responding to has been deleted or hidden.

Another speaker, Farid Esack, described as a “South African activist and Muslim liberation theologian” was recently condemned by the Israeli Embassy in Germany following his controversial appointment to a German University. An Embassy spokesman said of Esack: “This is a man who expressed antisemitic statements, and who is sympathetic to Holocaust denial. A person with such views has no place as an educator in a university, in particular not in Germany; due to both professional as well as moral and probably also legal reasons.” He was also barred from speaking at an ‘Israel Apartheid Week’ event at the Pantheon-Sorbonne University in France in 2015 after complaints were received by the institution. In 2015, he hosted a fundraising dinner for his “comrade” Leila Khaled, the convicted Palestinian terrorist, plane hijacker and member of the Popular Front for the Liberation of Palestine politburo.

We are contacting all three universities following requests from a number of students.