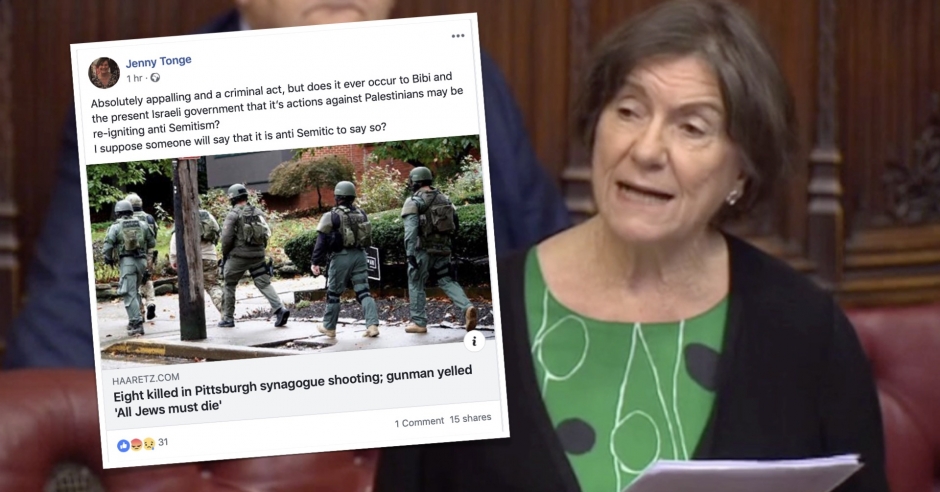 Disgraced Baroness Tonge, who was twice suspended from the Liberal Democrats over allegations of antisemitism and eventually resigned as pressure mounted, has suggested that the Israeli government bears some responsibility for today’s horrific far-right terrorist attack on the Tree of Life Synagogue in Pittsburgh. Her immediate response to the attack was to post on Facebook: “Absolutely appalling and a criminal act, but does it ever occur to Bibi [as the Israeli Prime Minister is nicknamed] and the present Israeli government that it’s [sic] actions against Palestinians may be re-igniting antisemitism? I suppose someone will say that it is antisemitic to say so?”

Attempting to blame the Jewish state for the actions of a neo-Nazi terrorist while, the bodies of his innocent victims are not yet cold, is utterly abhorrent.

Baroness Tonge has a long history of using inflammatory, and sometimes antisemitic, language. In 2003 she compared conditions in Gaza to those in the Warsaw Ghetto, for which she was criticised by the chairman of the Yad Vashem Holocaust museum. The following year, during a spate of suicide bombings targeting Jews in Israel, she said that she “might just consider becoming [a suicide bomber] myself” if she was a Palestinian. After her comments were condemned as “completely unacceptable” by her own Party leader, Charles Kennedy, she told the BBC that suicide bombers’ actions are “appalling and loathsome”. Two years later in 2006, she told a fringe meeting at her Party conference: “The pro-Israeli lobby has got its grips on the western world, its financial grips. I think they’ve probably got a grip on our Party.” Once again, her Party leader, then Sir Menzies Campbell, said that her comments had “clear antisemitic connotations”, but she was unapologetic.

In 2010, in response to an antisemitic blood libel alleging that Israeli soldiers providing aid in Haiti were secretly harvesting victims’ organs, Baroness Tonge suggested that Israel should conduct an inquiry to “clear the names of the team in Haiti”. The Party leader, who by then was Nick Clegg, called the comments “wrong, distasteful and provocative”, and removed her as the Party’s health spokesperson. In 2012, the situation worsened when Baroness Tonge told a group at Middlesex University: “Beware Israel. Israel is not going to be there forever in its present performance.” Party leader Nick Clegg challenged her to apologise or resign for her remarks, following which she resigned the Party whip.

In 2015, Campaign Against Antisemitism condemned Baroness Tonge for asking a written question in the House of Lords which held Jews collectively responsible for perceived wrongdoing by Israel by calling for “Jewish faith leaders in the United Kingdom [to] publicly to condemn settlement building by Israel and to make clear their support for universal human rights.” Last year, she used a speech in the House of Lords to again call on “Jewish faith leaders in the United Kingdom publicly to condemn settlement building by Israel”, for which we condemned her, however her Party refused to act. When we called on our supporters to complain to the Liberal Democrat Party, the Party bizarrely respondedthat they would investigate if they received complaints. We then confirmed that our complaint was already a complaint and heard nothing more. Meanwhile Baroness Tonge wrote a misleading letter to The Independent claiming that Campaign Against Antisemitism was in fact an organisation which secretly opposed organ donation.

In October 2016, Baroness Tonge responded to a report on rising antisemitism by the House of Commons Home Affairs Committee with a letter in which she wrote: “It is difficult to believe that a 75% increase in antisemitism [the Committee] reports, have been committed by people who simply hate Jewish people for no reason. It is surely the case that these incidents are reflecting the disgust amongst the general public of the way the government of Israel treats Palestinians and manipulates the USA and ourselves to take no action against that country’s blatant disregard of International Law and the Geneva Conventions.” The failure to act led a Liberal Democrat former candidate to quit the Party. One member of the public reported the letter to Sussex Police.

In February last year, after Baroness Tonge called for Campaign Against Antisemitism to be deregistered as a charity, Parliamentarians rallied to support us in the media.

In May last year, Baroness Tonge shared and then deleted an image belittling the Holocaust by equating it with the situation in Gaza. The cartoonist, Carlos Latuff, had won second prize in one of Iran’s repulsive Holocaust denial cartoon competitions.

Then in August last year, she shared an antisemitic caricature on Facebook. The caricature was part of an image which claimed to expose the “AIPAC Jewish lobby” through a quote supposedly from Pink Floyd singer Roger Waters. In the bottom-right corner of the image, an antisemitic caricature of a big-nosed Jew clasping his hands together can be seen. The caricature is commonly used by neo-Nazis and far-left extremists in antisemitic social media memes. The original post, which Baroness Tonge shared, was posted by Saeed Sarwar, who commented on the image: “I’ve checked with 4 specialist friends in case anyone tries to suggest this is antisemitism. It’s actually bang on.”

It is hight time that Baroness Tonge was removed from the legislature and stripped of her title.

CAA reacts to the attack on the Tree of Life Synagogue in Pittsburgh: “All...

Baroness Tonge steps down from Palestine Solidarity Campaign after suggesting...
Scroll to top